What you learn at forest school

Many children grow up with little experience of the rugged outdoors. New efforts to help them let loose with nature could benefit their behaviour and their health 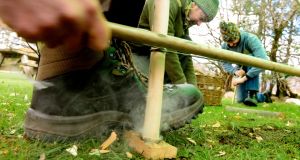 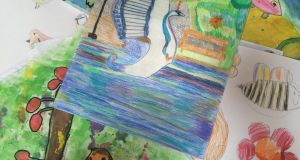 Wild Postcard Project: some of the more than 300 entries received so far; birds, butterflies and foxes are the most popular subjects 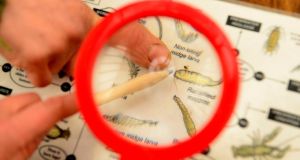 About 100 adults spent last weekend on the shores of Lough Dan, in Co Wicklow, sharing ideas and skills from mapreading to collecting wild food and cooking gorse bread on a fire lit with a flint and steel.

Five years ago an outdoor event of this type and size would have been unheard of in Ireland. But now, thanks to the efforts of two environmental scientists, Kate Egan and Dr Sophie Nicol, the growing community of outdoor-education enthusiasts were able to come together at the second Festival of Outdoor Learning Ireland.

The diverse group included Montessori-school teachers, forest-school leaders, bushcraft tutors and wild-food experts drawn together by their love of learning under the open sky.

“Five years ago Kate and I attended the Lindley Education Trust festival of outdoor learning in the UK and decided we needed something like that here. So in 2013 we set a Facebook group, Environmental Education Ireland, to raise awareness about the benefits of learning outdoors . . . and now we have over 900 members. Last year we had about 50 people come to a festival in the Kippure Estate [near Blessington, in Co Wicklow], and this year we’ve twice that number,” says Nicol, a marine ecologist.

Widespread attention has been paid to the benefits of children learning outdoors since the American author Richard Louv developed the concept of nature-deficit disorder. In books such as Last Child in the Woods, from 2005, Louv linked the rise in obesity, attention-deficit disorder and depression to children’s lack of contact with nature. Networks of outdoor educationalists have since developed to provide children with opportunities to swing from ropes, climb trees and explore natural habitats with a sense of adventure rather than fear. Forest-school leaders are one such group at the festival. With about 75 around Ireland, they are about to form the Irish Forest School Association. “We want to see this in every school in Ireland,” says Ciara Hinksman. “Forest schools are about empowering children to explore nature in a robust way, teaching them to manage risk. It’s not about rules and instructions.”

At forest-school events children learn to make swings in trees, to use ropes to climb muddy slopes, and to be outdoors whatever the weather. “We say there is no such thing as bad weather, just bad clothes,” says Kerry Walker, who runs a forest school for parents and toddlers at Brigit’s Garden, in Co Galway.

Erica Daly and Sarah Daly are Montessori teachers who came to the event to find ways to engage children outdoors. “The main barrier to children being outdoors is teachers who don’t want to go outdoors themselves. But there are huge benefits. Children learn how to manage risk better outdoors, they develop their gross motor skills – and everyone benefits from the fresh air,” says Daly.

“One child got stung by a nettle recently. I said, ‘Go find a dock leaf, to take the sting away,’ and she didn’t know what I was talking about,” says Daly.

Tomás Aylward teaches on the outdoor-learning degree course at the institute of technology in Tralee, Co Kerry. “There is a genuine sense of sharing practice at events like these,” he says. “Education in the outdoors is for, in and about the outdoors. There are lots of families who want their children to engage with nature now. The issue is that many of them don’t know what they think about public environmental debates, because they haven’t engaged with nature themselves.”

Aodhnait Carroll ran a workshop on mapreading and interpreting the landscape. “Sometimes we build models of the mountains on a small scale and then compare that to the maps and the mountains themselves,” she says.

Her partner in Outdoor Learning Ireland, Terrance Glancy, gave a workshop on taking people with disabilities outdoors. “It’s adaptive orienteering, a noncompetitive social walk in which people engage with nature while following symbols that lead them on loops,” he says.

“It’s all about changing the perception that the outdoors is dangerous, inaccessible and dirty to being a wonderful place for all.”

He and Carroll are doing master’s degrees in outdoor education at the University of Edinburgh. “In Scotland the curriculum has opened up to the inclusion of outdoor education. There are huge benefits for mainstream education that we’re only starting to see in Ireland,” Glancy says.

“There is a network of skills available now, so we need to address the culture of learning environments so children can find an emotional connection with nature. From that will come an ecological understanding of nature.”

Launched by the environmental scientists Eileen Diskin and Angela Stevenson in February, the project has received more than 300 entries so far. “We want to raise the general awareness of the variety of animals and plants found in Ireland. The idea is that a beautiful thing an eight-year-old has done could end up the other side of the world, which lasts a lot longer than an Facebook post,” says Diskin.

Birds, butterflies and foxes are the most popular subjects so far. “We’ve great organisations highlighting biodiversity, and we’d like children to look at their work and the living world around them,” says Stevenson.

The judges include the artist Geraldine O’Neill and the surfer and environmental scientist Easkey Britton. The top 10 entries will be printed as postcards.

People aged from five to 18 can email their entries to wildpostcardproject@gmail.com or post them to the Botany Department, Trinity College Dublin, by April 30th. Entries will be returned to those who attend the Wild Postcard project launch, in Dublin in June; wildpostcardproject.com