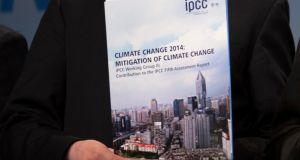 Following are main findings by the UN’s Intergovernmental Panel on Climate Change (IPCC) in a report saying time is running out to keep global warming within agreed limits.

The 33-page summary, by leading scientists, is meant to guide almost 200 governments which have promised to work out a deal by the end of 2015 to slow climate change.

Nations have promised to limit warming to a maximum two degrees Celsius above pre-industrial times, seen as a threshold for more heat waves, droughts and rising seas - temperatures have already risen about 0.8 degrees.

Emissions of greenhouse gases rose to a record 49 billion tonnes in 2010 from 27 billion in 1970. The rate of rise has accelerated this century.

Carbon dioxide from fossil fuels and industrial processes accounted for about 78 per cent of the increase. About half of all emissions since 1750 have been in the past 40 years.

With no extra efforts to slow greenhouse gas emissions, temperatures are on track to rise by between 3.7 and 4.8 degrees over pre-industrial times by 2100. China, the United States and the European Union are the top emitters.

How to stay below two degrees

World emissions will have to be cut by 40 to 70 per cent compared with 2010 levels by mid-century, and to near-zero by 2100, to keep warming below two degrees, IPCC scenarios show. Such cuts are far deeper than most governments plan.

The goal also implies more energy efficiency and a tripling or a quadrupling of the share of low-carbon energy by 2050, up from 17 per cent in 2010.

Low-carbon energy includes renewables such as wind and solar power, nuclear energy and fossil fuels using carbon capture and storage (CCS). Many CCS technologies, mostly experimental, use chemicals to strip carbon dioxide from flue gases and then pipe it underground.

Low-carbon energy also includes electricity generated by burning wood and other plant matter, combined with CCS. Such a combination would extract carbon from nature but is largely untested. Many IPCC scenarios to keep temperatures low rely on bio-energy with CCS and the planting of trees, which soak up carbon as they grow, in the second half of the century.

Delaying action beyond measures in place today until 2030 “is estimated to substantially increase the difficulty of the transition to lower long-term emissions levels,” the IPCC says.

Economic growth, measured as consumption of goods and services, is projected to grow by 1.6 per cent to 3 per cent a year this century. Ambitious action to slow climate change would trim annual growth by about 0.06 percentage point.

The cost excludes benefits of less warming, such as lower healthcare bills from air pollution.

In addition, annual energy efficiency investments in transport, buildings and industry are projected to increase by about $336 billion a year. Many cities in Asia and Africa will be built in coming years, giving a chance for greener growth.

Last year the IPCC raised the probability that climate change since 1950 is mainly man-made, rather than the result of natural variations in the climate system, to at least 95 per cent from 90 in a previous report in 2007.