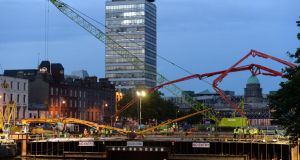 The scene last summer of the pouring of concrete for the new Luas bridge over the river Liffey between O’Connell Bridge and Butt Bridge. Photograph: Frank Miller

The disused Phoenix Park tunnel is to be reopened for rail services under a transport plan for Dublin that will cost nearly €900 million to implement over the next five years.

The largest single share of capital expenditure under the plan will fund completion of the Luas Cross City line, linking St Stephen’s Green with Broombridge, Cabra, on which work is already under way.

The two projects are key elements of the final version of a scheme for public transport in the capital, published yesterday by the National Transport Authority (NTA).

Coalition’s overall capital plan while resources for the remaining two years (2017 and 2018) “will be addressed in the next national capital investment plan”.

Minister for Transport Leo Varadkar said reopening the Phoenix Park tunnel had the potential to “significantly improve rail commuter services from Kildare and the west and southwest of the city”.

Reopening the route, which once carried the Belfast Enterprise train to Cork, would allow some commuter trains to bypass Heuston Station and head for Connolly Station, via a loop through Cabra.

The plan also aims to improve services, including greater integration of all public transport modes “through ticketing and fares, customer information, complementary services and improved accessibility”.

Three proposed bus rapid transit routes are to be “designed in detail and brought through the requisite statutory processes”, although construction is “contingent” on future funding being made available.

On buses, there is to be more investment in the fleet, with a continuous programme of vehicle replacement, better bus stops and shelters, and more widespread real-time passenger information.

On rail, the programme includes completion of a long-promised city centre resignalling project, to relieve a “bottleneck” at Connolly Station and allow more commuter trains to run at peak periods.

There will also be a “significant investment” in the growing network of cycle lanes, safety measures for pedestrians and cyclists as well as “enhancements” of the Leap Card and “additional products”.

NTA chief executive Gerry Murphy said the authority “will maintain a significant differential between Leap Card payments and cash payments” so that card would “always enjoy a much cheaper fare”.

. Hence, the importance of continuing to invest in public transport.

The plan sets out “key principles” to guide how land is developed for residential and commercial uses and states it will be “vital” that these principles underpin zoning decisions.