Opinion: ‘How about cutting back on cleaning the kitchen or bathroom? It’ll be a health hazard but, hey, at least I’ll be conserving a finite resource’ 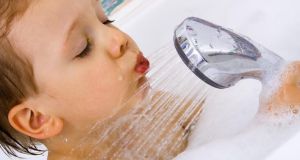 ‘Our family includes two teenagers, one with hair almost to her waist. So the shower is in constant use. Is it time to lower our standards of personal hygiene?’ Photograph: Getty Images

Time is passing. All I can do is sit like a pig that’s being fattened for Christmas and wait.

Starting on October 1st, I won’t be able to wash my family’s clothes, make the kids porridge or mop the kitchen floor without being charged for the water I use. When the first bill arrives in January (just after the mugging that’s Christmas; great timing!), it will charge for water used during the previous three months.

To try to budget for this, as a guide I’m using the flat fee for a household like mine (five people, one kid over 18). According to the Commission for Energy Regulation, this would be €382 a year.

Every time we’re socked by a claim on our dwindling family income, I look for ways to lessen the damage. With the electricity bill, I have tactics for keeping it down: unplugging appliances not in use; never charging a phone overnight; turning off the immersion after half an hour.

What habits can I change so that we use less water? None. None of these small economies can be adapted to water charges. We only turn on water when we need it, and we need it constantly.

Our Government and Irish Water have my family exactly where they want us. What a wheeze! No getting around this one: take that, all you savvy shoppers who slope up North to buy cheaper food, clothes and medicine.

I’ve heard the lectures from born-again conservationists. Before he was dispatched to an austere afterlife of public service as a European commissioner, Phil Hogan was evangelical in preaching that water was a finite resource that we must use more wisely. Enda Kenny talked about taps running needlessly for hours, just because.

Hogan is back in the spotlight since RTÉ revealed he approved a detailed list of costs for setting up Irish Water, despite later claiming he didn’t know how much was earmarked for consultants. Want to know what’s a finite resource, Phil? Our money.

This has nothing to do with conservation. This is about gouging ordinary families; just like the universal social charge, the higher car tax, the doubled carbon tax, the bin charges (and the abolition of the tax credit for them), the levies on insurance policies and pensions, the climbing university registration fee – on and on and on.

I know people in other countries pay for water. When I lived in the US, I paid for water as part of my property tax. It was a small part of a tax that also paid for schools, libraries, bin collection, mosquito abatement and umpteen other public services – a tax that was fixed for four years. In other words, I could pour myself a glass of H2O without running up my bill.

For Irish charges to encourage conservation, there must be a way for us to use less water. I can’t find it. Enda’s advice is to turn off the tap. I don’t know how the Kenny household is run, but here we already turn off taps when we’re finished.

The other day I did the family laundry: six loads. Should I have insisted we wear dirty clothes for one more week? Then I ironed. Litre after litre of water disappeared into the steam iron. Now, that’s posh.

How about cutting back on cleaning the kitchen or bathroom? It’ll be a health hazard but, hey, at least I’ll be conserving a finite resource.

Our family includes two teenagers, one with hair almost to her waist. So the shower is in constant use. Is it time to lower our standards of personal hygiene? (My youngest child has volunteered to go without a wash indefinitely; however, as her school is under permanent attack by nits, her sacrifice is not a goer.)

The ways we use water are essential: to drink, to wash and prepare food, to flush loos, to clean the house, to wash and iron clothes, to clean ourselves. None of which can be curtailed.

Is there anyone in this country who thinks the same won’t happen with water?

All I can do is seethe and wait. Not just for my first water bill, but for the next general election.