The bog boy of Girley

Girley Bog, in Co Meath, has many protectors. But nobody brings it to life more vividly than 12-year-old nature enthusiast Tim Sullivan 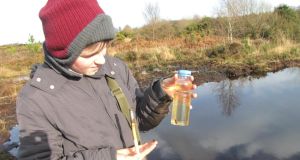 Unique perspective: Tim O’Sullivan with a dead dragonfly nymph on his hand and a live one in the jar, both from the pool on Girley bog behind him. Photograph: Paddy Woodworth 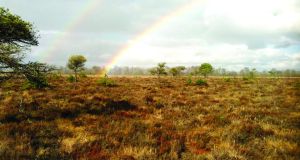 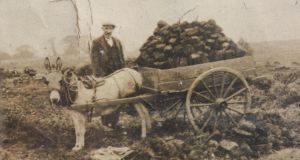 No one can step twice into the same river, Heraclitus said. He might have added that each individual walks in a different landscape from their neighbour. We all carry a set of unique perspectives with us, which influence what we see on any patch of land, and how we interpret it.

Girley bog, in Co Meath, has been interpreted more richly, and by more people, than most of our threatened peatlands. The approach taken by the historical ecologist Kate Flood is particularly unusual, peeling back layers of cultural and environmental experience on the bog over the centuries.

A conversation with Flood reveals curious details. The bog sheltered a clandestine workshop that made hand grenades for IRA volunteers during the War of Independence, she explains. The keshes – wicker bridges over drains – were fitted with little bells to warn of approaching strangers.

Then the conversation jumps to her advice to contemporary foragers on bilberries (“pick the fruit, by all means, but sparingly”) and on cranberries (“they are too scarce; leave them on the bog and buy your sauce in Tesco”).

One of her most fertile sources is oral history. Two recollections from childhood turf-cutting in the 1950s exemplify the way that the same place can evoke radically different responses.

Tony McGuinness, a farmer, remembers it with relish: “We always had fantastic appetites down there. Whatever is in it, you’d be starving. The bog air is so pure, it’s very healthy. It’s quiet and calming.”

But another local resident doesn’t agree. “I never liked the bog,” she says. “You were so far away from everything. It was a dirty, dusty place. You’d always be hungry. For miles around, all you’d see was bog, bog, bog.”

When 12-year-old Tim Sullivan walks on the bog today with Flood, however, he sees infinite variety, as he pieces together countless significant details in its web of life. Many more experienced naturalists would envy his powers of observation, and of making connections between species and their prey and habitats.

When he first met Flood he asked her how many species of shield bug had been found on Girley. She had to admit that she had no idea. In the past few months Sullivan has found six.

He greets us on the bog with a little net on a long bamboo. He is eager to sweep bog ponds for invertebrate life. But we have hardly started on the loop walk, fringed with birches and pines, when he pauses. He has picked up the almost imperceptible call of a goldcrest, our smallest bird, high in the branches. He imitates the call so perfectly that it moves down towards us.

“The coal tit’s call is very similar,” he says. “You just add a little trill, like this.” Cue a coal tit, foraging with the goldcrests, flitting across our path.

But Sullivan is much more than a birdspotter or insect lister. He is endlessly curious about animal behaviour and about the connections between the creatures he is watching.

He picks a tiny ladybird, smaller than any I’ve ever seen, off a piece of moss in the hedgerow. He thinks it’s come out of hibernation to hunt for midges and aphids, smaller beasties still. But isn’t it vulnerable to hungry birds?

“Yes, but its colouration makes it difficult to spot,” he says, although he had found it easily enough. “And it produces something that makes it taste very bad.”

He recalls being puzzled by the flight of a female dragonfly, which kept zigzagging among tussocks of grass. But after watching for a while he saw that it was flushing grasshoppers, and catching them in flight.

He knew the dragonfly was a female because he found it laying eggs. But when he sweeps a pond and nets some midges among the mosquito larvae he identifies the gender of midges by their antennae.

I have to confess to being a little sceptical. I can’t see the antennae without a hand lens, and I know nothing about sexing midges. But when I get home I Google the topic and find that “the males have large, plumose antennae which they use to locate a female of the same species. These antennae are so delicate and sensitive that they can distinguish the air vibration of a female’s wings from all other types of insects.”

Sullivan seems to have William Blake’s enviable ability to find a world in a grain of sand. And he is fairly dismissive about using a hand lens or binoculars. He hardly seems to need them – until he comes upon a burdock, the first he has found anywhere, bristling with its distinctive seed heads.

These are the seeds whose burrs inspired a Swiss engineer, George de Mestral, to mimic on cloth its capacity to attach itself to any passing creature. The result was Velcro.

Sullivan wants the hand lens now, and is delighted with what he sees close-up. “These hooks are mad: they are reinforced, and they are thicker than their stems. They are like claws.”

Inevitably, we continue our walk with burrs attached to odd parts of our persons. But how, Sullivan asks, pondering the mysteries of seed dispersal, had the burdock learned to make seeds that hooked so well on to anything hairy?

That was a question, we tell him, that Darwin had had some difficulty in answering. But don’t be surprised if the next advance in the theory of evolution emerges from Cortown national school.

As we leave the loop trail we meet Rebecca Doyle of the Native Woodland Trust, one of several NGOs and State agencies with projects on the bog (see panel). The trust has been planting a hawthorn hedge and a little wood on the margin of the bog, with cherries along the trailside, “for the pollinators, and for the people passing by”.

There is just time before we leave to meet James and Jing Farrelly, whose Zatino travel company brings Chinese tourists to the bog. James has deep roots here; he gives me a photograph of his grandfather, apparently the only image of turf-cutting on the bog in the 1950s.

Today the bog is enjoyed by an ever widening range of people: local dog walkers and international tourists, hen parties and historical ecologists. And naturalists, young and, well, older. We all see different bogs. Isn’t that the joy of it all?

The meitheal includes local farmers, who have generally ceded traditional turf-cutting rights. Causey Farm, a cultural tourism and educational centre, organises many events on the bog.

The National Parks and Wildlife Service designated the bog as a National Heritage Area, and the agency has overall responsibility for its environmental health.

Coillte, which used to plant conifers here, has restored large areas as part of an EU Life project.

Meath County Council, through its heritage office, has also been closely involved in the development of the walking trail, and co-commissioned a hydrological study from Ray Flynn of Queen’s University Belfast that has guided restoration efforts.

The Irish Peatland Conservation Council has purchased part of the bog, and has started an experiment promoting the recovery of active – that is, sphagnum-producing – raised bog.

The Native Woodland Trust is planting trees and a wild-flower meadow on the bog margin.

Kate Flood has put together diverse information and image galleries on her bog blog, a “celebration of bogs, wetlands, mires and all wet and mucky places”.