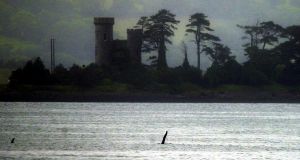 Indaver is poised to lodge a new planning application next Monday (January 11th) following An Bord Pleanála’s ruling, in which it will seek permission for a 40,000 tonne hazardous waste incinerator and a 200,000 tonne municipal waste incinerator in Cork Harbour. File photograph: Frank Miller/The Irish Times

Campaigners against a €160 million twin incinerator project in Cork Harbour have warned that coastal erosion by Storm Frank has highlighted the unsuitability of the site for the proposed development.

Indaver Ireland was refused planning permission by An Bord Pleanála in 2011 for the proposed facility at a 12-hectare site at Ringaskiddy on four separate grounds, including that it failed to address concerns over coastal erosion at the site and the risk of road flooding.

But on December 23rd last, An Bord Pleanála ruled on an application by Indaver and determined the proposed incinerator would comprise a strategic infrastructure development under the terms of the Act, paving the way for Indaver to submit a new planning application.

Cork Harbour Alliance for a Safe Environment (Chase) last night said the site remained completely unsuitable for the purpose, adding the damage caused by Storm Frank further underlined the correctness of An Bord Pleanála’s decision to refuse planning permission in 2011.

Chase chairperson Mary O’Leary said that Gobby Beach, which borders the proposed incinerator site on the sea-facing side, had suffered major coastal erosion.

It would be “absolutely ludicrous to consider building a waste incinerator on a crumbling coastline”, she said.

Ms O’Leary noted An Bord Pleanála also highlighted the risk of flooding on the roadway serving the site and said the road to the site had been flooded during Storm Frank when huge amounts of rain fell in Cork.

However, Indaver Ireland managing director John Ahern said the company’s new planning application would address the issues raised by An Bord Pleanála in its 2011 refusal, including concerns over coastal erosion and the risk of road flooding.

Mr Ahern conceded Gobby Beach had suffered coastal erosion during Storm Frank, but pointed out the beach was currently unprotected. Indaver’s new application would include comprehensive proposals to put protection measures in place to prevent erosion, he said.

However, Ms O’Leary pointed out that the World Health Organisation has advised on eliminating areas subject to coastal erosion and flooding from consideration in its site selection criteria for hazardous waste management facilities.

She noted that the WHO, in its site selection criteria, says: “Step 1 is to eliminate generally unsatisfactory areas (from consideration) - coastal areas subject to floods, coastal wetlands and areas with limestone deposits.”

It is understood the new Indaver planning permission marks a change from the refused application in a number of ways including that the footprint of the buildings will be reduced from 14,000 sq m to 9,000 sq m.