Lucasfilm’s use of Unesco world heritage site had ‘no long-term impact’, report says 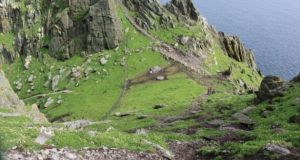 The Skellig Michael site after the removal of Lucasfilm’s tents and equipment. Photograph: An Taisce

A report into the Star Wars filming on Skellig Michael in early September has found that Lucasfilm’s presence had “no adverse impact on seabirds, their habitats or other biodiversity on the island”, despite two “minor incidents” which occurred during filming.

The assessment report, which was compiled by experts from the National Parks and Wildlife Service (NPWS) and the National Monuments Service (NMS), with input from the Office of Public Works (OPW), said the film crew’s presence over three days at the Unesco world heritage site had “no implication for the outstanding universal value of the World Heritage property and no impact on the national monument”.

However, the report reveals two incidents took place during filming that caused minor damage to the site.

A Lucasfilm crew member reportedly snagged their jacket on the edge of a stone in the entrance to the Upper Monks’ Garden, causing damage.

The report found the same section of stone had been displaced by a visitor to the island in mid-June and the opening was “immediately propped and repaired by OPW masons”.

A second incident occurred when a “small amount of diluted water-based paint” spilled on rocks adjacent to the Wailing Woman.

The report confirms that “highly absorbent spill pads” were used to mop up the spill and clean water was also applied to the area.

It also said that nests were not compromised in any way.

Minister for Arts, Heritage and the Gaeltacht Heather Humphreys, who published the report on Monday, said experts supervising the shoot, the cast and the crew had taken an “extremely thorough approach” to ensure the strict conditions for filming laid down by the department were fully adhered to.

“The two minor incidents reported were dealt with immediately, and will have no long-term impact whatsoever and no ecological consequence,” said Ms Humphreys.

“The reality is that the filming posed no greater challenge to the island than the 180 people who visit it every day during tourist season.”

Dr Stephen Newton from Birdwatch Ireland said that, despite assurances that there was no impact on seabirds, the shooting took place during breeding season.

He said the nests of storm petrel and manx shearwater seabirds on the island would have been filled with eggs and the birds’ young in early September, adding that the optimum time for filming would have been between November and March, outside of breeding time.

“I get worried when they say there was no impact, we can’t see what’s happening to their eggs or young,” said Dr Newton, adding that storm petrel nests are hidden in monastery walls and under steps.

“The impact of this sort of work, which had gone on for two years, is long-term. Disney film company should be funding the long-term monitoring of the island.”

Dr Newton said he would welcome a more open discussion regarding filming on the island, saying the consultation “was all very cloak and dagger”.

A spokeswoman for the Department of Arts, Heritage and the Gaeltacht responded that Birdwatch Ireland was given the opportunity the week before consent was issued to send a representative to the island during filming. She said Birdwatch Ireland turned down the offer.

The filming was supervised at all times by experts from the NPWS, the OPW and the NMS, under strict environmental and ecological restrictions, according to the report.

The report also found all 16 protection measures set out under the consent granted for filming were fully adhered to by Lucasfilm.

A letter published in The Irish Times in September signed by 12 Irish writers and a photographer criticised Ms Humphreys for negotiating the Star Wars project without consulting the Office of Public Works (OPW), the manager of the Unesco site.

The writers’ letter called on the Taoiseach and the Minister for Arts to guarantee that heritage sites will, in future, be managed in an “open, transparent and accountable” manner, with “respect and responsibility”.