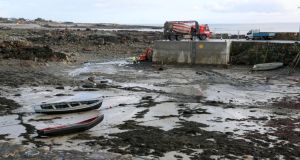 Work is carried out by Galway County Council at An tSeancéibh in Spiddal. Photograph: Joe O’Shaughnessy

The works, involving extending an tSeancéibh in Spiddal, have spoiled a historic structure on the Wild Atlantic Way and have made it almost impossible for sailing craft to navigate the harbour entrance, according to the pier users.

Tonnes of sand taken out of the harbour was used to fill a graveyard further along the coast at Béaladangan.

An tSeancéibh is a “Nimmo’s pier”, built of granite in 1822-23 as one of 55 such structures in 14 counties created by Scottish engineer Alexander Nimmo.

Mr Nimmo was employed by the British government to address Ireland’s infrastructural deficit, and played a “seminal role” in designing and building bridges and roads in almost every province, said his biographer Prof Noel Wilkins.

Galway County Council had been asked by the local community to do storm-relief works after the severe weather in January and February 2014.

However, pier users say the extension of the tSeancéibh with a large reinforced concrete retaining wall was not on the list. Mr Ó Coistealbha said not only is the extension “unsightly” but it has restricted access to the harbour and made it “more hazardous” for small craft.

The dredging has exposed rocks on the seabed, damaged the high-water side of the slipway and sand removal has also undermined its main foundation, he said.

However, rock armour on the seaward side of the pier, eroded in last winter’s storm, has not been replaced, he said.

Mr Ó Coistealbha questions why a foreshore license was not acquired, and why the Environmental Protection Agency or National Parks and Wildlife Service was not consulted about the impact on the lugworm beds.

Galway County Council said a foreshore license was not required as the work was part of storm relief, funded by the Department of Agriculture, Food and Marine.

It said €150,000 was allocated for the work, as damage was “very extensive at the head of the pier and the original rough stone structure was severely undermined and dangerous for all pier users.

“The repair of the pier head involved extensive works to stabilise and protect the pier head area,” it said, and “consultations were held with the local community group, Comhlacht Forbartha an Spidéil and pier users”.

It said sand was not removed and described it as “debris” adjoining the pier head, but confirms that some of it was used to infill a graveyard at Béaladangan.

“It was clearly explained that the priority of Galway County Council was to secure the pier head and make it safe for tSeancéibh users and the general public,” the county council said.

“It was also made clear that the repairs would consist of a reinforced concrete retaining wall which would effectively encase the pier head and a number of safety features including two additional access ladders, railings and ring buoys,” it said.

“The funding provided would not allow for stone facing of the pier head,” the county council said but it is its “intention” to seek additional money for this “in the future”.

Mr Ó Coistealbha said the “consultation” involved an informal meeting with two members of the local community group on the pier, and pier users were not contacted.