Sharks could be heading for Irish seas as waters warm 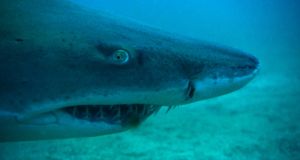 New types of sharks could be heading to Irish waters as a result of warming seas, experts have said.

A new study has revealed 10 species of sharks currently found in warmer parts of the world, such as hammerheads and blacktip sharks, may be swimming in Irish and UK seas within 30 years as the climate changes.

More species could be heading towards Ireland from places such as the Mediterranean and the coast of Africa as seas become warmer due to climate change, according to the research commissioned to mark the National Geographic’s week-long “Sharkfest” of TV programming this week.

Dr Ken Collins, from the University of Southampton, said: “It’s likely we will be seeing more sharks spread from warmer regions such as the Mediterranean Sea towards our waters over the next 30 years.

“These include the likes of blacktips, sand tigers and hammerheads, which are currently found swimming off the coasts of Spain and Portugal.”

He added: “Though while the potential number of shark species may increase in the next few decades, the overall number of sharks, especially the larger ones, will fall as a result of over-fishing, plastic waste and climate change.

“It’s really important we work together to prevent a premature extinction of these wonderful creatures.”

The numbers of great whites, hit by an image problem since the movie Jaws, are in decline worldwide.

Polling of 2,000 British adults for Nat Geo WILD channel found four in 10 people admitted to an irrational fear of sharks while swimming in the sea, while more than eight out of 10 think they have been given a bad reputation by Hollywood.

A spokesman for Nat Geo WILD said sharks had been portrayed for too long in a one-dimensional way, as terrifying predators, and Sharkfest aimed to reveal the “true awe-inspiring nature of sharks”. – Press Association