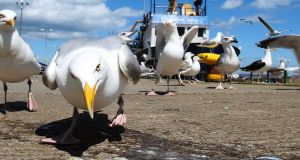 Seagulls fighting over scraps. Kerry senator Ned O’Sullivan said: “I have received hundreds of messages and calls. Without a word of a lie over 90 per cent were supportive and positive.” Photograph: Brian Lawless/PA

In an extreme case of life imitating art, a Fianna Fáil Senator has portrayed the scourge of swooping seagulls in Dublin in terms that mirror the plot of Alfred Hitchcock’s terrifying movie The Birds.

Ned O’Sullivan is from Kerry but stays in an an apartment close to Dublin’s city centre when the Oireachtas is in session. He has already raised in the Seanad the problem posed to humans by scavenging seagulls but he says it is so widespread and rampant that Dublin now needs to adopt a seagull policy, as has been done in other big coastal cities such as Boston, Amsterdam and Barcelona.

Mr O’Sullivan, a draper, said he invited some ridicule when he raised the matter in the Seanad earlier this year but was then inundated by correspondence from people who had been attacked or whose nights had been made intolerable by seagulls.

“I have arranged an email file from people who contacted me,” he said on the fringes of the Fianna Fáil think-in yesterday. “I have received hundreds of messages and calls. Without a word of a lie over 90 per cent were supportive and positive.”

Mr O’Sullivan said the problem was first brought to his attention by residents in the apartment complex where he stays, as well as by a number of Dublin-based councillors. He said the initial complaints related to noise, especially during the hatching season between March and September.

“If you are staying in a house or apartment in the city of Dublin in the hatching season, you are kept awake by seagulls screeching throughout the night. They are fighting, bickering and are raucous. They have caused sleep deprivation.”

However afterwards he was contacted by others who had been attacked by seagulls. Loud, aggressive and fearless, they saw humans as a feeding source and have been known to swoop down to steal sandwiches and fast food.

“I was contacted by painters and decorators and people who work at heights who are attacked by seagulls because they nest now on rooftops not clifftops,” Mr O’Sullivan added. “There are youngsters who have been attacked in parks and had their lunches snatched.

As to the solution, he said he was not suggesting a cull but his research had shown that other cities had successfully introduced policies to limit seagull numbers and abate their noise levels and more aggressive behaviours.