Ilíocht O’Brien, his wife Harriet and their family live a simple but happy sustainable and independent life at their 'off-grid' home in the hills of rural Co Leitrim. Video: Bryan O’Brien 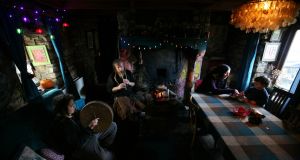 In 2000, Quentin Gargan and his then partner moved to a rural location outside Bantry in Co Cork.

“It was a move on our part to downsize and to become more self-sufficient,” Gargan explains by phone from Bantry, where he still lives. “We had a kind of missionary zeal; we were so concerned about climate change.”

The house Gargan lives in is a purpose-built straw-bale house; “a low-impact and more sustainable way of building a house”. Although they were hooked up to the grid, they deliberately wanted to live off-grid as much as possible, as a way of being self-sufficient. “The key thing is to reduce your demand and insulate the hell out of your house.”

They installed two small wind turbines, one of which Gargan designed himself, and three solar panels to generate hot water, which they retain. They also added two small solar panels, which cost €1,000 each at the time.

They used gas to cook, and a wood-burning stove to heat the house. They didn’t have any electric kitchen implements or heaters. They did have a freezer in an outside shed, which was powered from the grid, so that it would not have to be dependent on their own erratic store of energy.

In the years since Gargan moved to Bantry, the associated costs with generating one’s own electricity have changed. “When I put in the wind turbines, the solar panels were more expensive. It’s the other way round now. A small wind turbine is about €20,000. Ten years ago, the solar panels on my house would have cost between €10,000 and €12,000. Now they’d cost €1,500. The cost has come down because of mass production. The best – and the worst – solar panels are made in China. ”

The first challenge to trying to live off-grid as much as possible was the batteries. “They didn’t last. That was the biggest learning curve in the experiment,” he says ruefully.

He went through three sets of batteries, each set costing in the region of €2,000. The first lot lasted less than two years. “There are much better batteries on the market now, but after the second set died, I realised that they didn’t stack up, either financially or ecologically.”

What Gargan did do, however, was sign up to a scheme Electric Ireland offered customers some years ago. Customers who generated their own energy could sell any excess back to the company, for nine cents a unit. “The house can export electricity to the grid,” he explains. He buys a unit of electricity for 18 cents, which includes VAT. 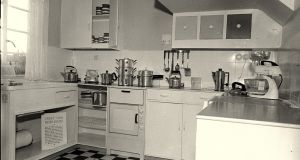 Explore the map to see when your area switched on

The Electric Ireland scheme, which was not widely taken up, has since been discontinued. “You can’t join it any more, but I’m still in it. So I’m always buying and selling electricity to the grid.”

Does that make for a very complicated electricity bill? “No, you get a payment once a year.” Gargan estimates that on days his house is sending energy to the grid, some 30 to 40 units are exported, for which he receives roughly €3.

“As I’ve started using more solar, it made more sense to use the grid as a battery.” He uses the grid all the time now, and the batteries he still had are just there for back-up in case of a power cut.

Gargan is on his third electric car; the first one he had, he built himself from a kit. “I plug it in at night on a timer, and it charges between 1am and 6am.” Fully charged, the car can do about 100km.

Reflecting on his 16 years of trying to live in an energy-efficient way, Gargan says: “For me, the major swing has been from thinking you can be self-sufficient in your energy use, to realising it’s about climate change. Individuals can’t beat the system.

“I’ve changed from thinking it’s about everyone doing their own bit, to realising its really about governments and world policy. Climate change won’t be solved by people living on the side of mountain, trying to conserve energy.”

As it happens, Ilíocht O’Brien and his family do live off-grid on the side of a mountain.

At the same time Quentin Gargan moved to Bantry, O’Brien moved from Galway to rural Leitrim, to a townland near Ballinageera. “It was the least populated county in Ireland and the prices were low.”

He bought a remote five-acre property, including a house that had been used as a sheep-shed for 20 years, and slowly renovated it. “It was kind of rough here for a long time. I did all my cooking over the fire. I didn’t have plumbing, but I had a compost toilet, and washed myself in the stream. I had candles.”

O’Brien did inquire about getting connected to the grid, but decided against it. “Getting connected was going to be so expensive, about €4,000, because it was a new service,” he says. “Then you’re paying standing charges before you switch a light on. I’d rather spend my time gardening than getting a job to pay for electricity. It’s a lifestyle choice. I want to spend as much time home as possible, and reduce bills.”

He has a wind turbine and three solar panels, as well as a generator that runs on petrol, although that is only occasionally used. He has gone through three sets of batteries, “It’s €2,000 for four of them.”

In 2010 his now wife, Harriet Myfanwy Nia Tahany, moved in with her young son Merlin. They now also have a two-year-old son, Gwyddion. “Getting married gave me the push to modernise the place more,” he says. “When I was here on my own, I was fine. I was a mountain man in my badger cave.”

“I love living here, but in my day-to-day life, I miss waking up and going downstairs and just putting on the heater,” says Merlin.

“It took a lot of time to teach them to be careful with the power when there is no wind,” O’Brien says.

“Not having electricity means that there is one less bill to think about it,” says Tahany.

Their home is primarily lit by coloured strings of LED fairy lights. “They only use half a watt or two watts,” O’Brien explains, “as opposed to the old 100-watt bayonet lightbulbs. LED lights have made this kind of living easier.”

They acknowledge their lifestyle wouldn’t work unless they were in agreement about it as a family. “We love it here,” O’Brien says, and they all nod. “We’re living in harmony with nature, and when you’re living off-grid with a turbine and solar panels, you are so aware of the weather all time, and what’s happening outside.”