Repaving area west of Grafton Street to start in March 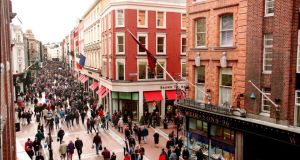 The work is part of the Grafton Street Quarter Public Realm Plan published in October 2013, which envisages a €14 million investment over three years.

The €1.8 million expansion of the Grafton Street repaving scheme to the streets to its west, some of which are open to traffic, is scheduled to begin within weeks.

The repaving of Grafton Street, which saw sections of the street cordoned off for months at a time since May 2013, is now complete, and the council is moving on to the streets and lanes leading to Clarendon Street.

Construction is due to start in March on Johnson’s Court, a narrow lane that runs from Grafton Street to the Powerscourt Town Centre, and on the pedestrianised section of Wicklow St.

The council then intends to issue tenders for the repaving of Chatham Street, largely dominated by pubs and restaurants, and Balfe Street and Harry St which provide access to the Westbury Hotel. However, the council said the issuing of tenders for these three streets might be influenced by the timing of number of private developments in area.

The work is part of the Grafton Street Quarter Public Realm Plan published in October 2013, which envisages a €14 million investment over three years.