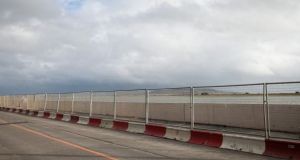 An independent expert commissioned by Dublin City Council to review the height of the controversial Clontarf sea wall has recommended its reduction.

In a draft report seen by the Irish Times, Dr Jimmy Murphy of University College Cork, who was engaged by the council following objections from residents to the height of the flood defence wall, suggested it be reduced by 10cm-20cm.

Dr Murphy also said alternatives to the concrete wall, such as demountable barriers were viable, if costly, solutions.

Clontarf residents last October objected to the construction of the wall, opposite Bull Island nature sanctuary, being built as part of a €5 million, 2km cycle path from the Wooden Bridge to Causeway Road. They were concerned about the height of the wall, which they said was considerably greater than they had expected, and its bare concrete appearance.

Following negotiations with residents’ groups and local politicians the council last November agreed to put stone cladding on the road side of the wall. It also agreed to engage an independent expert to examine the “technical information” that informed the decision to build the wall, and to examine if the height “was a proportionate and correct response” to this information.

In a draft report submitted to the council in recent days, Dr Murphy said he did not find a “clear consistent design document and the information provided, as used to determine the wall height, sometimes differed between documents”.

But despite this, he said the 4.25m height of the wall “was appropriate” within the criteria set down by the council to protect against flooding for 200 years.

However, he said the 200-year condition was “an extreme value” and related to a “level that has never been recorded in Dublin Bay in over 90 years of records”.

Dr Murphy recommended the council review its design criteria and in particular the “sea level rise” allowance of 40cm, and instead have between 20cm and 30cm of an allowance.

“The wall height should still be sufficient to provide flood protect for at least 50 years,” he said.

This proposed adjustment of the wall height “should only be applied at locations where the visual amenity is most affected as agreed between DCC and local groups”.

If this solution was implemented the council would need to frequently review extreme water levels and sea-level rise rates and have a plan in place for increasing the wall height, to ensure that there is a sufficient level of flood protection, he said.

In relation to other solutions instead of the concrete wall, Dr Murphy said demountable barriers were a “well proven solution” but would require new planning permission and the costs would be “relatively high”.

There was “no doubt that glass panels could be designed to work” for the site, but he acknowledged these could cost up to €5,000 a metre, would require regular cleaning, be prone to vandalism, and could have negative environmental impacts.”

Local Independent TD Finian McGrath said it was positive that Dr Murphy saw scope for reducing the height of the wall, and added “we won’t be backing off one inch until this matter has been fully resolved”.

The council did not respond to queries on the report yesterday.