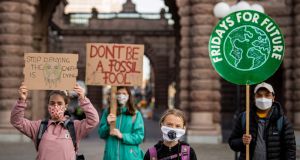 Swedish climate activist Greta Thunberg protests outside the Swedish parliament in Stockholm during a Fridays for Future climate protest last week. The pandemic has only intensified the widespread appreciation that business as usual can no longer be countenanced. Photograph: Jonathan Nackstrand/Getty Images

The teenagers of Ireland had planned on hosting a massive Fridays for Future protest last week on September 25th to remind their elders that they continue to expect radical action on the climate and biodiversity crisis. The pandemic crisis postponed that demonstration, but it has only intensified the widespread appreciation that business as usual can no longer be countenanced.

The speed and scale of social and economic adaptation in the face of Covid-19 has confirmed what many young people have suspected for a long time: another way of organising our world is possible. There will come a time when we are no longer haunted by the spectre of this novel coronavirus.

The memory of how rapidly we could mitigate the threat will not pass so quickly. As the effects of climate and biodiversity breakdown become more and more evident, the calls for radical changes to our economy and society will become irresistible.

The moral clarity of young people on the environmental crisis has been a beacon for wider society, a source of hope for many. But there is an unexpected resonance between the vision of the emerging generation and one of the longest established institutions in our society.

The insistence that radical change for the sake of the environment is unavoidable and that it must be paired with a just transition focusing on those already marginalised and disadvantaged by society is not just the politics of idealistic teens, it is papal teaching.

Five years ago, Pope Francis published a letter on care for our common home called Laudato Si. It was greeted with acclaim, winning surprising support from activists like Naomi Klein. The core concept driving this encyclical is “integral ecology”: the idea that there is no way to address the environmental crisis without also addressing our social crises.

In the popular imagination, Pope Francis’s papacy is interpreted as a dramatic shift from the style of his predecessor, pope Benedict XVI. But the last encyclical published by the pope emeritus should be read as the starting point for this new movement within Catholic social teaching.

In the aftermath of the financial crash of 2008, pope Benedict XVI published Caritas in Veritate – Love in Truth – a document that advocated for the wholesale rejection of unregulated capitalism in favour of an economic and political system that truly represented global perspectives and foregrounded pro-social concern for the common good instead of profit.

If an alliance emerges between teenagers and octogenarian pontiffs, a Green New Deal may just become irresistible


Next Saturday Pope Francis publishes his second encyclical, Fratelli Tutti. The topic is clear from the title: we are all brothers and sisters. The message of profound social solidarity is timely during this pandemic, when we so painfully understand our inter-connection.

The virus has spanned vast geographies, pays little heed to class barriers, and afflicts without reference to gender, creed, or race.

Each document on its own might be easily overlooked, read only by theologians like myself who are interested in the intersection between social justice and church activism. But taken together, the three most recent papal encyclicals represent a remarkable and potentially revolutionary challenge to the status quo.

Few of the teenagers who are part of Fridays for Future are likely to consult the bishops of Rome for political inspiration, but there is a noteworthy harmony between some of the oldest sources of wisdom in our society and some of the youngest.

Calls for thorough forms of economic redistribution, transformative environmental care, and fundamental solidarity with people regardless of difference is not the exclusive preserve of our idealistic young people.

They are mainstream Christian teachings advocated by popes over the last decade.

Since the beginning of the pandemic, unemployment has skyrocketed across the globe, while the top 0.1 per cent have seen their wealth grow scandalously. It is not guaranteed that enduring the pandemic together will bring about a more just new normal. But there is hope.

Ideas like integral ecology can help establish that new normal, supplemented by unexpected alliances between the new and the old, the emerging and established. More than any previous crisis faced, many strange bedfellows must become acquainted. If an alliance emerges between teenagers and octogenarian pontiffs, a Green New Deal may just become irresistible.