While the shale gas mantra focuses on jobs, cheap energy and recovery, the evidence contradicts these claims 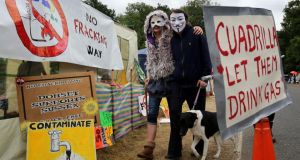 When I was in school, my English teacher introduced me to the concept of “God words”, words whose associations are so visceral that they can’t be argued against.

As a result, rational discourse flees from them like birds from the sound of a hunter’s rifle. I went to school in Ronald Reagan’s America and my teacher cited “Liberal” and “Communist” as God words. Use these words against your opponent and they’re unlikely to get a fair hearing.

Thirty years later and we have new words. During his recent speech at St Angela’s College in Sligo, Taoiseach Enda Kenny linked fracking to reducing emigration, creating jobs, and lowering the cost of energy. Jobs. Recovery. Cheap energy. Never mind that many legitimately question whether these are jobs worth having, or that the energy is really cheap when you consider all the costs.

David Cameron is at it too, writing in the Daily Telegraph that fracking has “real potential to drive energy bills down” and that a thriving shale-gas industry could create tens of thousands of jobs and millions of pounds for local communities. Jobs. Recovery. Cheap energy. How can anyone not be in favour?

Fracking – in the form that Messrs Kenny and Cameron are so keen on – is roughly a decade old and involves drilling horizontally underground for miles and then injecting the bores with water, sand, and chemicals under high pressure. The liquid absorbs the gas, and when the pressure is released, about 20 per cent of the water comes to the surface where the gas is extracted. The rest of the water and chemicals (including substances like benzene, diesel, and formaldehyde) remain underground. Estimates for the number of wells that could be drilled in the northwest are in the region of 3,000, drilled in sets of between 16 and 24 on sites about five to nine acres each, requiring an infrastructure of roads, pipelines, storage and treatment facilities, millions of gallons of water and hundreds of tons of chemicals, delivered by thousands of lorries and forced into the earth’s crust by large noisy compressors each time you frack each well. If analysis by the US Securities and Exchange Commission has any relevance to Ireland, only 600 of these wells will be commercially viable.

Value for money
But what about jobs? Tamboran Resources, the Australian company who applied for a licence to explore the shale in north Leitrim and Cavan, claim that “€7 billion gas investment could create 600 full-time jobs”. That’s €11.6 million per job. Leaving aside whether that really represents value for money, let us bear in mind that that is not a net figure.

Food, agriculture and tourism support almost 500,000 jobs and even a marginal loss resulting from fracking will significantly exceed the jobs promised by fracking promoters. Just last month, the New Zealand-based dairy co-operative Fonterra announced that it would no longer accept milk from any new dairy suppliers based in areas of New Zealand where fracking waste has been spread and covered. In the United States, if all the jobs promised by fracking promoters materialised, it would have reduced the 2012 unemployment rate by a whopping 0.5 per cent. Hardly a “game changer”, Mr Rabbitte.

But what about cheap energy? According to Deborah Rogers, former adviser to the US Department of the Interior on extractive industries, the gas is cheap only because producers have glutted the market to service their debts. Fracking is very expensive and investors expect rapid and significant returns. If these low prices persist, the fracking industry will collapse. In her lecture Fraconomics, she says that claims about the amount of extractable gas have been vastly and routinely overstated – in many cases, by more than double the actual production rates. She goes on to say that the much-touted 100 years of US gas available “simply isn’t true in a way that is meaningful”. At today’s prices and using today’s technology, there are only about 11 years of gas available.

But what about recovery? If only about 11 years’ worth of gas is recoverable, how much of a recovery is that going to fuel? Certainly not a sustainable one. According to an industry publication, Powers Energy Investor, production at the Fayetteville shale play in Arkansas reached peak production a mere six years after drilling began. This is relevant because Tamboran believe that Fayetteville is the shale play that most closely resembles the shale in Leitrim. And Tamboran’s projections assume rates of productivity that have simply not materialised in the US.

Jobs. Cheap energy. Recovery. Fracking is not necessarily going to provide any of these things, and it is reasonable to argue that it will do the exact opposite. So why is there no debate at Government level? The sad truth is that debate is pointless – facilitating onshore gas extraction is already government policy.

Political decision
The focus of the Coalition’s efforts is to ensure a legal basis for fracking. The EPA study is not considering whether it should be allowed, or the impact 3,000 wells would have on human health. They’re only considering the effects of fracking in exploration. And once exploration proves commercial reserves, firms will have the right to exploit them. They’ll need planning permission and safety permits, but ultimately the use of fracking is a political decision – and this one’s being made without any meaningful public debate.

Jobs. Cheap energy. Recovery. These words tell us to accept the future, not to choose it. Choice requires debate, openness and accountability. But that’s not what we’re getting. School’s out.

Scott Coombs lives in north Leitrim and
is a member of the Love Leitrim group, which campaigns against fracking.