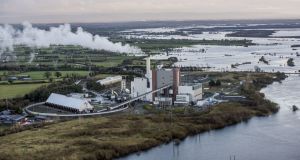 A move by the ESB to combine peat with biomass at its West Offaly Power Station is “fundamentally misconceived”, according to environmental groups led by Friends of the Irish Environment (FIE).

The groups have claimed the ESB’s framing of climate aspects of the proposed co-firing of peat and biomass at the plant in Shannonbridge was “misleading”, as it would not lead to a reduction in carbon emissions.

The ESB’s position was outlined at an An Bord Pleanála oral hearing in Tullamore recently.

“The applicant’s argument that the project will result in emissions reductions is therefore wrong as a matter of fact and fundamentally misconceived,” he added.

If the effects of peat production and biomass production, combined with their transportation impacts, were properly assessed by the board the project should be refused, FIE said.

The ESB’s intention to use indigenous biomass supplies were unrealistic, Mr Kenny added, and he expressed concern that the source of the additional biomass had not been identified.

FIE cited its current proceedings issued last month in the EU General Court challenging the treatment of forest biomass as a renewable fuel in the EU’s 2018 revised Renewable Energy Directive. They cited scientific studies showing the greenhouse gas emissions from forest biomass was greater per unit of energy produced than coal.

According to FIE, the ESB has not provided information regarding where this biomass would be produced, other than in the most general terms. The ESB refused a request from the environmental organisation for its considerations of forms of biomass for use as the work was “not complete”.

Kate Ruddock of Friends of the Earth said peat in electrical generation contributed 9 per cent of Irish electricity but was responsible for 20 per cent of pollution from the electricity sector. “Not only is peat one of the most carbon-intensive fuels in the world, draining and excavating bogs destroys the natural habitat and pollutes water.”

On the same day it was in the Dáil arguing against subsidies for microgeneration, the ESB was trying to change the fuel mix in its peat stations to avail of lucrative biomass subsidies, she added. “We need a real plan to end peat burning in Ireland, not to extend it.”

The ESB was invited by An Bord Pleanála to participate in an oral hearing process regarding the future development of West Offaly Power, a spokesman for the company told The Irish Times.

“As outlined during that process, the transition from peat to sustainable biomass at West Offaly Power is a key part of ESB’s commitment to decarbonising electricity production in Ireland. This development, in turn, will also allow the plant to continue to support the regional economy and contribute to Ireland’s security of clean energy supply,” he added.

A decision is due on June 6th.