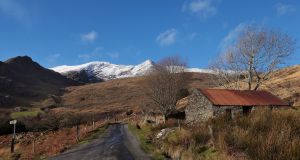 Black Valley is home to about 70 people. Photograph: Valerie O’Sullivan

A huge increase in tourist and leisure traffic is making life uncomfortable in a remote and beautiful valley, a meeting has been told in Co Kerry.

The Black Valley – between the Gap of Dunloe and Moll’s Gap – has been a tourist destination since pre-Victorian times. Recently, however, it has seen a dramatic increase in tourist traffic recently with the successful promotion of the Wild Atlantic Way and interest in walking and cycling.

The infrastructure is not in place to help tourists or residents, the meeting of the South and West Kerry Municipal District heard in Killorglin.

Cyclists, walkers, cars, and horses and traps, are all crowding on to the single-lane road. There is no public toilet and there is no mobile phone signal.

Large-scale events, involving groups of walkers and cyclists, are being located in the valley without notice.

Lack of signage and proper warnings meant tourists were getting lost, 'and crying their eyes out' as they were unprepared for the small Irish roads

The valley between Kenmare and Killarney is home to about 70 people, most of them involved in farming. Residents are worried about safety, their own as well as that of visitors, and they feel exploited by outside tour operators.

Lack of signage and proper warnings meant tourists were getting lost, “and crying their eyes out” as they were unprepared for the small Irish roads.

According to figures from Fáilte Ireland, overseas and domestic tourism numbers in the southwest grew from 3.2 million in the period from 2012 – before the advent of the Wild Atlantic Way brand – to some 4.1 million in 2016.

Revenue from these overseas tourists in the region grew from €562 million to €849 million in the period contributing significantly to the record growth in overseas tourism – worth €4.6 billion to the Republic in 2016.

According to Tourism Ireland, the body which promotes the island of Ireland abroad, the three most popular regions for overseas visitors are Dublin, Northern Ireland and the southwest.

However, while tourism is booming Fáilte Ireland did sound a warning on “concerns over capacity” in its “Spring Barometer” published in April 2017. Citing issues such as hotel capacity in Dublin, the commentary went on to note concern from tourism interests that “it’s not just accommodation at capacity”.

The barometer which repeats the comments of hospitality operators said “some attractions face overcrowding, which impacts on visitor satisfaction” .

Other comments cited in the barometer said “visitor attractions are overcrowded, even going into the peak season. They are becoming overly saturated”.