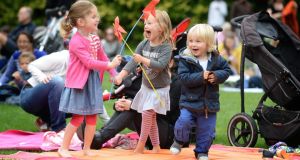 It was organised by Stop Climate Chaos, the Climate Gathering and People’s Climate Ireland. Ciara Kirrane, co-ordinator of Stop Climate Chaos, said the event was held to send a message to Taoiseach Enda Kenny that people in Ireland cared about climate change.

“This level of prioritisation of climate change, both at home and internationally, is long overdue,” she said.

In Clare, a coastal clean-up of Blackhead was organised by the Burrenbeo Trust and other groups to mark the day.

Former president of Ireland Mary Robinson will jointly host a gathering of more than 130 women leaders in New York today which will call for gender-sensitive climate action.