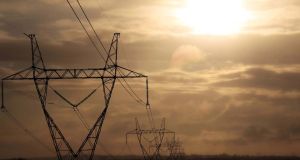 Midi de Paor Walsh of Rethink Pylons: “We started out all about the pylons about a year ago and then we realised very quickly the pylons and wind farms are connected.” Photograph: Colin Keegan/ Collins

Wind farm and pylon opponents from across the country have vowed to target Fine Gael politicians in an effort to change energy policy.

Representatives of pylon and wind groups from 17 counties met in Co Laois on Saturday to discuss mounting a united campaign. In all, 85 local action groups took part in the meeting, said Henry Fingleton of Wind Aware Ireland.

The event was organised to raise awareness and propose ways of putting pressure on Minister for Energy Alex White and Minister for the Environment Alan Kelly.

Speaking after the event, which was closed to the media, Mr Fingleton said: “We estimate there are more than 200 groups, between wind and pylons, in the country and they have never joined up properly, so this is the start of that process.”

He warned Fine Gael TDs to expect they would “actively work to make sure that unless you support communities instead of the industry we are going to target individual Fine Gael seats”.

He was highly critical of An Bord Pleanála and said six groups were pursuing High Court actions challenging the board’s decisions. In five of those cases, planning was approved against the recommendation of the board’s inspector, he claimed.

Anne Quilter of North Kerry Wind Turbine Awareness Group said she had attended the meeting because “we realised there are so many of us out there individually fighting the same fight against the same bureaucracy”.

Midi de Paor Walsh of Rethink Pylons: “We started out all about the pylons about a year ago and then we realised very quickly the pylons and wind farms are connected.”

She described the meeting as “very important” because “it is the first time that we have all sat down together”.

“We are trying to educate as many people as possible and get as many groups together as possible so we can get information to everybody,” she added.

One of the meeting’s organisers, Jackie Carroll of Save Our Stradbally in Co Laois, said the groups came “from all over Ireland, from Mayo to Kerry to Wexford to Cork – pylon and turbine”.

She said she was confident the groups would work together.

“When we came to this meeting we were already united. We have our actions. We are totally focused.”

Longford/Westmeath byelection candidate Tom Crosby was alarmed to learn of the number of High Court cases being taken by the groups. He cited a recent High Court case relating to a wind farm in Dysart, Co Roscommon. “It certainly shows there is a flawed system there,” he said.