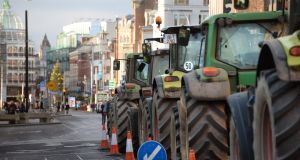 An investigation by the State’s consumer watchdog has found there is “no evidence of a cartel agreement” between beef processors, amid complaints from farming groups over low prices.

The Competition and Consumer Protection Commission (CCPC) is responsible for investigating anti-competitive practices and potential breaches of competition law.

Last year the watchdog received a large number of complaints about the beef sector from farmers. The complaints focused on similarities in prices offered by processors to farmers across different plants, among other issues such as dissatisfaction with the criteria for “in spec” bonuses, and the importing of foreign beef.

Growing tensions between processors and beef farmers came to a head last year, with farmers staging protests blocking the entrances to meat plants for several weeks, and others staged outside Leinster House bringing the city centre to a standstill over the dispute.

In a statement on Friday, the CCPC said on foot of the complaints it conducted “extensive research” to investigate the allegations of a cartel in operation to fix low beef prices offered to farmers.

The watchdog met industry experts, farmers groups, and officials in the Department of Agriculture, Teagasc, and Bord Bia, as well as consulting the European Commission on market conditions elsewhere in the EU.

“Information showing that beef processors charge similar prices does not, in itself, constitute evidence that a cartel is in existence,” the watchdog said.

“Despite considerable engagement with various beef industry stakeholders, the CCPC found no evidence of a cartel agreement between beef processors in the State,” it said.