New bin charges: When, why and how much will it cost?

Q&A: Everything you need to know about the new pay-by-weight refuse collection system 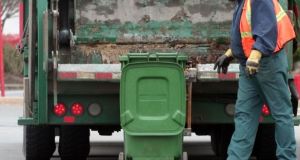 What are the bin charge changes?

New pay-by-weight legislation introduced by the Department of the Environment comes into effect on July 1st and will affect 1.2 million households. All households that have a kerbside collection will be required to pay for their bins on a per kg weight basis. The system is aimed at helping to reduce the amount of waste sent to landfill, as required under EU law.

Why is this happening?

The move to pay-by weight was flagged in the Government’s National Waste Policy published in 2012. It is expected to increase household recycling levels by between 27 per cent and 32 per cent, and to divert up to 35 per cent more waste from landfill. Since July last year, all waste collectors have been obliged to weigh the waste they collect and to make the information available to customers. A 12-month window was built in before the new charges applied.

What will it mean for my bills?

Your waste provider is obliged to get touch with you to outline changes to their charging mechanism. The provider should already be making available to you the details of how much waste you put in your bins.

Former minister for the environment Alan Kelly said in February that 87 per cent of households would see a reduction in their waste bills, 8.5 per cent would see no change and that “a small number” of households may see higher bills.

It was claimed in the Dáil this week by one Fianna Fáil TD that all the waste companies are “piling on the increases” in charges. Examples were given of families paying €200 under the current charging regime who would see their charges double under the pay-by-weight system. Another TD was in correspondence with a family who said their charges would rise from €440 to €770.

Is there a limit on what the companies can charge?

The Government set minimum mandatory fees to ensure households are charged for at least the cost of treating the waste collected. A minimum mandatory fee per kg has been set for the different types of waste: 11 cent for black bin (residual waste) and 6 cent for the brown bin (organic and food waste). A zero cent minimum fee may be charged for green bins (recycled waste). This means companies in the waste market may set their prices at anything above those levels. They may also impose a service charge and these rates vary across providers.

The Government has said it was a matter for each company within a competitive market to decide what fee levels they will charge and what service charge they will impose.

What can I do if I feel the price rise is unreasonable?

The Government has admitted that with the range of charging mechanisms and contracts and different prices across the State “it is very hard to work out what the average family pays”. It says if there is more than one waste collector in an area then the householder should contact a number of them to ensure they get value for money.

How can I measure how much waste I produce and what it weighs?

The Department of the Environment says that, on average, a typical family generates about 600kg of residual waste, 200kg of organic waste and 200kg of recyclable waste every year.

Many waste providers have already made the details of your bin weights available through an online account. Wheelie bins are generally fitted with RFID chips, which enable the waste collector keep track of the weight and to link it to the household.

There are approximately 750 bin trucks in the Republic. Legal metrology inspectors with the National Standards Authority of Ireland are responsible for checking they weigh refuse accurately. They have the power to prosecute businesses that fail to comply with the law.

I live in an apartment complex and pay for my bins through my management charge. What will happen to my bills?

It is a matter for the management companies to decide how to implement the charges.

I am on social welfare. What do the changes mean for me?

Some waste operators still provide discounts to former waiver customers on a voluntary basis. The Government says, however, that a national waiver scheme could not be imposed in the context of an open market for waste collection. Solutions for people with disabilities who may need to dispose of extra waste are being discussed “as a matter of urgency”, the Government says.

How can I reduce my waste?

Keep a small bin in your kitchen for food waste and separate it from regular waste. Compostable bags are available which can be put into the brown bin. Bring electrical waste or worn out clothing to a local bring centre, which should work out cheaper than putting it in the bin. Reduce, re-use, recycle.

What can the Minister do to reduce the extent of the increases?

Simon Coveney has signalled he may introduce new regulations if necessary. He said if “interventions” are required to manage the charges for a period of time to ensure that a new charging regime can be adopted that is accepted by householders as making sense for them and for the environment, then that will be done.