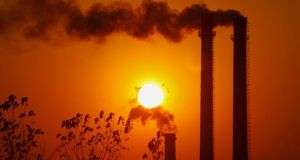 Asthma costing the State some €533million per year

A major new alliance to push for better air quality was launched in Dublin this afternoon - amid a spirited row between environmentalist Duncan Stewart and Minister for Environment Phil Hogan.

Chief executive of the Asthma Society of Ireland Sharon Cosgrove took the chair to launch the new alliance, to be known as Inhale, which she said was being formed to achieve better outcomes for more than half million people who suffered from asthma – a feature which she said was costing the State some €533million per year.

Speaking as he arrived from a Cabinet meeting Mr Hogan paid tribute to former minister Mary Harney for the ban on smokey coal - which he said was being extended to towns with a population above 15,000. He said he had reached agreement with the Northern authorities to consider over the next three years, an all-Ireland ban on smokey coal.

Mr Hogan also said he had chosen air quality as a priority for Ireland’s EU presidency and substantial progress was being made in discussions with the EU Commission on this policy.

However Mr Stewart immediately made an impassioned call for Mr Hogan to ban the sale of smokey coal outright, in the Republic, or say why he would not.

Mr Stewart said Mr Hogan was instead considering a proposal to reduce the carbon levy on coal, but he said this proposal was being brought about by lobbying on the part of solid fuel importers. He told Mr Hogan such a proposal would cause “major damage” and he urged him to instead implement the ban and save “possibly 1,500 lives” over the next three years.

Earlier Mr Hogan had told the launch there was no benefit to the Republic of burning coal which was an imported fuel and which in an open fire released eight times more carbon than gas.

But Mr Hogan said he needed to bring all stakeholders with him in improving air quality and a unilateral ban on smokey coal in the Republic would give rise to a major issue of cross-Border smuggling.

Mr Hogan said he “wouldn’t get acceptance from the Department of Finance in relation to the smuggling issue” and he did not think he would get instant support from the Northern Assembly.

In response to Mr Stewart’s point that people were dying from the effects of air pollution from coal Mr Hogan retorted; “I hope you wouldn’t accuse me of contributing to peoples’ illnesses”. Mr Hogan said much progress had been made in extending the ban on smokey coals and he was delighted to be the first minister to attempt to bring in an all-Ireland ban on smokey coals .

Inhale which stands for Ireland Needs Healthier Air and Lower Emissions officially welcomed negotiations with the Northern authorities, and the extension of the ban in the south as “a step in the right direction”. Ms Cosgrove said the new organisation was being launched on World Asthma Day and the 40th anniversary of the setting up of the Asthma Society of Ireland.