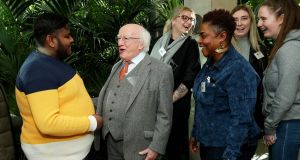 President Michael D Higgins has said he flies commercially and takes the train to events when possible, in a bid to reduce his carbon footprint.

Speaking after a conference on climate action at Maynooth University, the President said he was “doing his best” to lower his carbon emissions and tackle the biodiversity crisis.

“I travel by train when I can and when I do events around the country, I do three or four together so that you can reduce the amount of carbon,” Mr Higgins said.

“In relation to the very much publicised Government plane, I think I’ve used it once in the last three years because I travel commercially – the same as everybody else.”

The President said he had recently been invited to take part in a conference in Geneva but turned it down due to the environmental impact of air travel.

“I sent on the paper instead, in advance, for discussions rather than travelling to and from Geneva. But these are difficult choices because we have to be part of the conversation.”

He added that a biodiversity survey and energy audit were being carried out at Áras an Uachtaráin in a bid to be more environmentally friendly.

The conference, entitled Just Transition, discussed what steps can be taken by citizens to become greener, without penalising those who are on the poverty line.

Speaking at the event, Prof Ian Gough, an associate at the Grantham Research Institute on Climate Change and the Environment at the London School of Economics, said trying to tackle climate change without dealing with global inequality was “inconceivable”.

He proposed three strategies to deal with this: to improve the eco-efficiency of consumption; to switch from high-carbon to low-carbon consumption; and to reduce the level of consumer demand.

Prof Gough suggested scaled tariffs for utilities such as electricity and gas should be introduced, as he believes this would take into account both inequality and climate change.

“I would like to advocate a policy of social tariffs whereby the first X amount of units of electricity or gas are charged at a low rate, and usage above that are charged at a subsequently higher rate,” he said.

“It’s not impossible to do. It would differentiate between luxury use of electricity and gas, and support homes where utility bills are already unaffordable.”

“Raising carbon prices is an obvious solution, and a dominant one, but the problem is that carbon pricing is almost always regressive. The three big necessities – heating, food and transport – are high-carbon activities. It will hurt poorer regions and households,” he said.

“To compensate the losers, I argue, cannot work. There’s so many different factors affecting the emissions of households and regions. It is very difficult to compensate. Targeted compensation also enhances poverty traps,” he added.