Gardaí say since water charge protests, photos and names being posted to intimidate 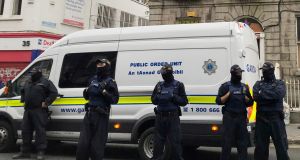 While the hoods are Garda-issued, many in the force say they were being worn on North Frederick Street on Tuesday night to guard against online intimidation. Photograph: Jack Power

Comments from inside the Garda on the fire-retardant “hoods” or balaclavas worn by gardaí at the Take Back the City housing crisis protest in Dublin have focused on safety.

And while the hoods are a Garda-issue piece of safety kit, many in the force say they were being worn on Tuesday night to guard against a new hazard: online intimidation.

They point out that when the Government was trying to introduce water charges, gardaí were deployed to ensure workers installing water meters could do so unimpeded by protesters who sought to physically stop them.

And during those policing operations, a new practice became pronounced; gardaí being videoed and photographed on mobile phones and the images being posted on social media.

Gardaí complain that this now happens incessantly, adding they are often taunted – sometimes for hours – by sections of a protest crowd hoping to illicit a reaction that can be captured for sharing online.

A number of gardaí who have spoken to The Irish Times in recent days said they believed the public order gardaí wore their balaclavas on North Frederick Street on Tuesday night so they would not be identified in social media campaigns.

The Garda Representative Association (GRA) and Association of Garda Sergeants and Inspectors (Agsi) have raised the issue of online harassment repeatedly at their annual conferences.

Delegates have said gardaí policing protests regularly become a target for the anger that demonstrators feel towards the State or whatever agency they are protesting against.

They have complained that many social media users posting images and video of gardaí on duty invite others to identify them.

In many cases, the comments have been very aggressive and gardaí have not only been identified but their home addresses, details of their daily routines, family members’ names and photos of their homes have also been shared.

At the Agsi annual conference last year, it emerged the young son of a garda was approached at a GAA match and told his father was a “scumbag” for policing a protest. This had occurred after a social-media campaign was run against the boy’s father.

Garda sources said the online activity is harassing and stressful for the Garda members involved and their families. And against that backdrop, they say, it was no surprise some of the gardaí policing the protest on Tuesday sought to conceal their faces.