Ireland will ‘not oppose’ measures to protect bees 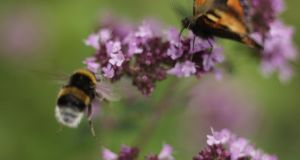 Minister for Agriculture Simon Coveney is seeking to water down an EU proposal restricting the use of pesticides linked to declining bee numbers in Europe.

Member states’ representatives will meet again today on the issue after they last month failed to reach a qualified majority for or against the European Commission’s proposal to ban the use of three neonicotinoid pesticides on crops including spring barley and oilseed rape. Farmers and seed traders say neonicotinoids are widely used in Ireland on oilseed rape, the cultivation of which is expanding.

Ireland voted against the proposal last time, but is now willing to consider a compromise, a spokesman for the Minister said. If no compromise can be reached, Ireland will “not oppose” the commission’s proposal, but it is not clear whether that means abstaining or supporting it.

Research
The Department of Agriculture has done no research on the effects of neonicotinoids on bees in Ireland, a senior official confirmed.

A study to be published by Trinity College scientists in the coming weeks will show that there are hundreds of bumble bee colonies living in oilseed rape fields in Ireland, as well as large numbers of other pollinators including honey bees, solitary bees and hoverflies. These insects increased the crop’s yield by up about 30 per cent, researcher Dara Stanley said.

“The amount of land used for oilseed rape has increased dramatically in the last number of years. All the evidence suggests neonicotinoids have an impact on bees in the UK and Germany, and there is no reason to suppose they don’t have in Ireland,” she added.

But the Department of Agriculture official said, with only 16,000 hectares under oilseed rape cultivation in Ireland last year, the risk to bees was low. Ireland’s decision to vote no last time was also based on a belief that the Commission’s proposal went beyond the scope of evidence compiled for it by the European Food Safety Authority, he said.

Since coming on the market in the 1990s, neonicotinoids have become some of the world’s most widely used pesticides. They work by damaging insects’ nervous systems, causing paralysis and death.