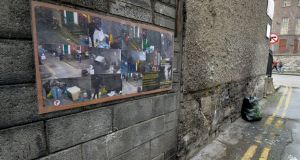 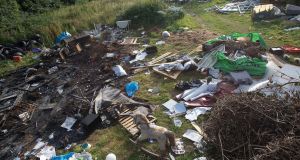 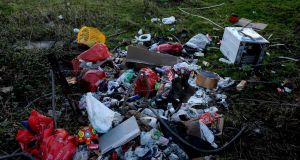 Faced with a mountain of illegally dumped household waste, Dublin City Council set out this year to “nab the culprits”. What its inspectors found illustrates the attitude of many of those responsible – and not just in the capital but all over the country.

In the six months to April, the council’s North Inner City Litter Action Group investigated 4,000 bags of illegally dumped rubbish. In addition to rotting food, used nappies and the usual household detritus, some of the bags contained litter fines.

Ultimately the council used CCTV and – controversially – published photographs of people dumping in a bid to discourage them and others. Whether or not it will have the desired effect is yet to be seen.

The scale of the problem is severe. Figures up to March this year show that 54 per cent of Dublin City Council households had not signed up to any authorised waste collection service despite a legal obligation to do so. The council said the cost of disposing of illegally dumped waste in 2015 was €640,000.

Dún Laoghaire Rathdown County Council said it spent €1.7million removing 2,300 tonnes of rubbish – including street-cleaning, community clean-ups, litter bins and illegally dumped waste. It was not possible to indicate what proportion of the figures related solely to illegal dumping and fly-tipping, the council said. Fingal County Council estimated it would spend €700,000 dealing with all waste this year.

Of course, the problem is not just Dublin-based. The State’s recent purchase of 5,000 acres of land at Glenasmole Valley in the Dublin Mountains brought with it an unwanted cargo: hundreds of tonnes of dumped waste.

Minister for State for Regional Economic Development Michael Ring, who pushed to have the lands acquired from Nama, said he was shocked by the dumping when he visited Glenasmole.

How could people destroy such a wild and beautiful habitat, he asked. The answer appears to be because it was easy.

Ian Davis, who runs the south Dublin and Wicklow-based Protecting Uplands and Rural Environments (Pure) Project said the scale of the dumping was no surprise. In 2015, Pure, which is funded by the Department of the Environment, collected 235 tonnes of illegally dumped waste, mainly from the foothills of the Dublin Mountains and Wicklow Mountains.

So far this year, the volume of waste has reached more than 150 tonnes, with Davis saying “it looks like this will be one of the busiest years for the project since we started 10 years ago”.

Nearly 800 cases of littering were investigated by Kerry County Council last year. Councillors, including Michael Gleeson of the South Kerry Independent Alliance, say incidences of rubbish being dumped along the side of roads are increasing.

In Longford, Leitrim and Roscommon, research carried out by Shannonside Northern Sound found just 17 cases of littering or illegal dumping were successfully prosecuted through the courts in 2015. This was “despite the fact that there were over 1,900 complaints received by council environment sections in Longford, Leitrim and Roscommon relating to litter or waste offences”, the radio station said.

In Louth bags containing domestic rubbish were dumped on Ardee’s main street last July, a move which saw Louth County Council removing a number of litter bins from the town. Council officials said they had to remove bins because “all we get is household rubbish”.

In Co Cavan, 265 incidents of litter or illegal dumping were reported last year. The council’s director of services Ger Finn said the authority was aware of a number of “black economy” operators providing waste disposal services in the county.

Illegal operators were also blamed in Co Wicklow when an estimated 100 tonnes of waste were discovered by a member of the public at Charlesland. The county is still dealing with large-scale industrial dumping of domestic and hospital waste with a number of legal cases involving the council going through the courts.

Meanwhile, householders in Galway recently discovered their personal correspondence turned up in an illegal dump in Ballyhaunis, Co Mayo.

Minister for the Environment Denis Naughten said that despite high recycling rates in certain categories, illegal dumping “remains a problem affecting too many communities in Ireland”.

He stressed the need for high detection rates and for penalties for non-compliance to be “sufficiently serious that non-compliance is just not worth the risk”.

Naughten said the State’s three new Waste Enforcement Regional Lead Authorities (Werlas) would play a pivotal role in the State’s fightback against what he described as “waste crime”.

Each authority will have responsibility for co-ordinating waste enforcement actions within regions. They will also have access through a national steering committee to representatives of the Revenue Commissioners, the Department of Social Protection, the Environmental Protection Agency and the Garda among other authorities.

This is to ensure that when a rogue operator is targeted, attention is focused on everything to do with their business, from waste licences to PRSI payments to vehicle regulations to social welfare fraud and even illegal immigration.

Funding of €8.2 million was being provided in 2016 for the retention by local authorities of 155 specialised waste enforcement officers, critical to tackling issues such as illegal dumping in local communities, Naughten said. He said their highest priorities would include diesel laundering and end-of-life tyres.

While diesel laundering will continue to be targeted by enforcement, the Government has licensed a new entity, Repak End of Life Tyres, to oversee the issue. This unit, which will operate as a separate entity to Repak’s current recycling business, will charge producers about €2.80 per tyre placed on the market and use the money to fund waste management as well as contributing to the cost of cleaning up the estimated 10 to 15 million “legacy” tyres stockpiled in illegal dumps, in warehouses and on farms across the State.

Some of the State’s most successful recycling is in the area of waste electronic and electrical equipment (WEEE). Since the scheme was set up in 1996, the number of large household appliances dumped has dropped significantly. A reported 74 per cent of all washing machines placed on the market in 2015 were recycled, as were 63 per cent of fridge freezers.

European directives requiring Ireland to recycle 45 per cent of all electrical items by 2016 are being met, but the rate is to rise to 65 per cent by 2018.

However, what is not so successful is the recycling of small tools such as electric screwdrivers, with just 19 per cent being recycled. There are also challenging targets for batteries, according to chief executive of WEEE Ireland Leo Donovan, who said higher recycling and efficiency standards were having an impact.

If the materials recovered from the recycled batteries do not achieve a high enough sale price to fund their effective disposal, the producers have to meet the shortfall. While this has the potential to increase costs, Donovan says t it also encourages manufacturers to produce goods which are more readily recyclable.

“The EU draft package on the circular economy will focus producers’ minds on the design, durability, repairability, reusability as well as the recyclability of their products,” he said.

Another difficulty is getting the message out. Many people may not be aware that they no longer have to buy a new electrical item, as was once the case, when they bring something back for recycling.

According to the Irish Waste Management Association, just over 1,017,688 tonnes of municipal waste were recycled in 2014, the latest year for which figures are available.

In terms of treatment, landfill is considered the worst option available, below incineration, which allows energy in the form of heat and/or power generation.

State policy is to deter landfill through levies of about €75 per tonne. This has led to operators exporting residual waste, mainly to the Netherlands or Germany, where they pay for it to be incinerated.

While the waste industry says landfill capacity is rapidly running out, it has agreed with the Department of the Environment to extend the life of a number of landfills for residual waste. At the same time, cement kilns and the Indaver incinerator in Co Meath are also increasing the amount of material they will take.

However, it is clear the industry and the Government are now relying on the opening of the Poolbeg incinerator to ease the current pressure on landfill capacity.

Are you aware of serious dumping or littering in your area? Send us details to help us highlight this problem in communities around Ireland. We will also follow up with the local authorities to ensure action is taken.