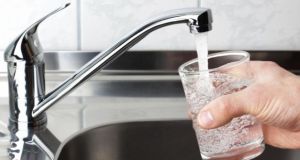 Irish Water said households that have received incorrect bills should get in touch to correct their information. Photograph: Getty

Irish Water customers who fail to pay their bills for four consecutive quarters will be fined on their fifth bill.

The utility company will start sending out the first bills at the start of April. More than 1.7 million households will receive bills, including about 700,000 who have not yet registered for the charge as well as about 150,000 households that are not customers of Irish Water.

The company said it had to operate with incomplete information and that households who receive incorrect bills should contact them to get their information amended.

Irish Water’s head of communications Elizabeth Arnett said the quarterly bills will be capped at just over €39 for a single adult household and €64 for a household of two or more adults. unregistered households will be charged €64.

Ms Arnett told RTÉ radio’s Morning Ireland that a third of households who have a meter will pay less than the €65 and €39 charges.

Earlier RTÉ reported that Irish Water confirmed it would be sending out thousands of incorrect bills.

It said that with a new billing system, some people are likely to receive incorrect bills for the first while.