Forty of the State's worst ghost estates to be demolished 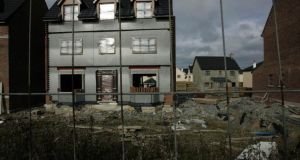 Council officials have been in touch with the property developers involved and their banks to draw up plans for dealing with the worst cases. Photograph: Eric Luke

The demolition of the State’s worst unfinished ghost estates will begin next year under a plan devised by Minister of State for Housing Jan O’Sullivan.

Ms O’Sullivan has drawn up a list of 40 estates for demolition in the next 12 months.

Others are likely to be added when the initial programme is complete. A spokesman for the Minister of State said yesterday that 40 estates which have no hope of being developed will be bulldozed next year.

Some of them are at a very rudimentary stage with no completed houses in the developments.

Council officials have been in touch with the property developers involved and their banks to draw up plans for dealing with the worst cases.

The legal owners of the properties are now considering whether to comply with requests by the local authorities to clear the sites or propose alternative plans to deal with them.

Most of the ghost estates targeted for demolition are not close to the main urban centres and are owned by small local developers.

The spokesman said some of them have partially built houses on them but many have just foundations and groundworks and could be returned to green field status relatively easily.

The latest inventory of unfinished estates provided by local authorities to the department shows that there are less than 1,300 of them in the country. This compares with 1,770 a year ago.

A significant number of unfinished estates have been brought up to standard over the past year with local authorities providing proper road access as well as footpaths, roads, lighting and other services.

A fund of €10 million was allocated in the budget to provide these facilities in estates where most of the houses have been occupied.

Councils can apply to draw down money from this fund and Ms O’Sullivan is hoping that the provision of basic services will persuade developers to finish off the houses in the improved estates.

‘Private finance’
“If this works by attracting the private finance to finish out a number of estates we can make the case to do it again.

“As of now we have the funding for 2014 but €10 million is just enough for the first phase of a programme to deal with problem estates,” said the department spokesman.