Large renovation will include offices, resting rooms and hearse depot at Dublin site 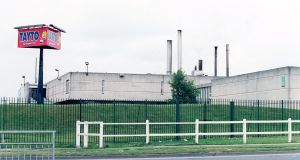 Tayto’s former flagship factory in Coolock is to be turned into a large funeral home complex and hearse depot.

Dublin City Council has granted permission to Staffords Funeral Homes to develop a new headquarters complete with offices, chapels, resting rooms, a showroom and a florist at the abandoned industrial facility on the Malahide Road.

The main production site for arguably Ireland’s most identifiable brand of crisp for nearly four decades, the factory was closed in 2005 with the loss of almost 100 jobs as the company sought to outsource operations to the Largo Foods plant in Ashbourne, Co Meath.

Tayto was bought over by Largo foods for €62 million the following year.

Since then the 13,400sq m site has fallen into disrepair, with frequent complaints of trespassing, vandalism and anti-social behaviour from nearby residents.

As part of the plans approved by Dublin City Council, Staffords is to create a new 2,000 sq m head office which will also function as a central depot with capacity for 22 hearses.

Part of the existing factory structure will be refurbished and divided into four chapels, five resting rooms and a showroom with space for a florist.

Part of the site will be left vacant for rental to third parties, and extensive landscaping works and boundary treatments will be undertaken.

Describing the grounds as being in a “run-down” and “unkempt” state, the council’s planning officer Diarmuid Murphy said the redevelopment proposal does not constitute “typical light industrial use” for such a site, but indicated that the new purpose is not objectionable as it will not displace any existing jobs.

The council adopted his recommendation that any new use of the large signage pole facing onto the Malahide Road which had been emblazoned with a large Tayto logo would require a separate planning application.

Staffords is one of the largest funeral directors in Dublin with locations in nearby Donnycarney, Portmarnock, Dublin city centre and its current headquarters in North Strand.