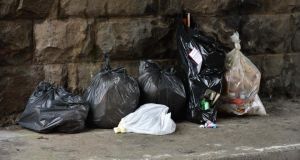 
Fingal County Council is owed more than €110,000 in outstanding litter fines from 2012, although an official has admitted they are unlikely to be paid.

Martin Daly, a senior staff officer at the Fingal inspectorate division, said the council was unhappy with the rate of payment but a lack of resources made it difficult to pursue all offenders.

In 2012 Fingal’s six litter wardens – reduced to four this year – dealt with about 3,000 complaints, received mostly from the Environmental Protection Agency and the public via the “dumping hotline”.

Typically wardens sift through the bags’ contents, looking for anything which would identify the culprit. If they find an addressed envelope, a fine is issued by registered post to that property.

“Happy days if the fine is paid. If not, it’s cancelled,” he said, adding that the wardens would like to pursue all suspected offenders but “how much energy are we going to put into chasing €150?”

The council does chase serious cases through the courts and last year prepared over 200 files for prosecution. Nonetheless income in 2012 was down on previous years: in 2011 1, 220 fines were issued, of which 504 were paid, generating €82,825.