Female killer whale washed up on beach in Co Waterford 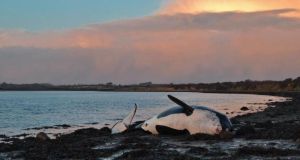 A female killer whale is seen on the beach at Saleens near Tramore, Co Waterford. Photograph: Clare Scott via @MonsterMermaids on Twitter 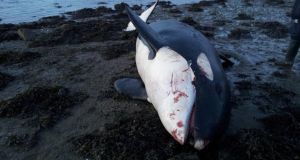 The killer whale seen on the beach at Saleens near Tramore, Co Waterford. Photograph: Jim Griffin 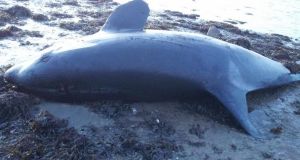 Marine biologists are working to remove the body of a killer whale which washed up on a beach near Tramore in Waterford on Friday morning.

The five metre whale was spotted by a passerby who alerted members of the Irish Whale and Dolphin Group (IWDG).

It is believed the predatory mammal may have died of malnutrition and was dead before it washed up on shore.

“It’s probably a youngish female, but its teeth are worn down which is kind of surprising. Looking at the teeth you’d think it’s a very old animal,” said Andrew Malcolm of the IWDG.

“When you see the teeth as worn down as that you would speculate that it could be malnourished, and that it wasn’t getting enough to eat.

“It doesn’t look particularly malnourished to me compared to some I’ve seen washed up, but we won’t be able to tell for sure until after the postmortem,” he added.

The large size of the creature means that it will have to be removed from the beach on a phased basis.

Members of the marine biology unit at Galway Mayo IT are currently working on extracting vital organs and blubber from the stricken animal. It is hoped its skeleton can be preserved and mounted in the local area following the postmortem.

“The cutting up of the animal would be done on the beach. If it was a smaller animal they’d probably stick it on a trailer and take it back, but because it’s such a big animal stranded on the beach means that it will have to be done on-site,” said Mr Malcolm.

Sightings of orca whales in Irish waters are rare and just 15 carcasses have been recovered from these shores over the course of the last century.

The last such record was at Tullaghan Bay, Co Mayo in 2010.

The whale’s location has perplexed some, given that virtually all killer whale sightings occur along the west and south west coast. Indeed, the last sighting in the Dunmore East area was recorded four decades ago, according to Mr Malcolm.

He says that although a pod of nine whales regularly visits the waters off Ireland’s west coast it is not thought the Tramore whale belongs to that group.

Saleen beach has been busy since the discovery was made with people visiting the site to look at the deceased animal.

“It’s pretty mad down here, there’s just a constant stream of people coming, taking selfies of themselves with the whale,” said Mr Malcolm.

He also cautioned against any physical contact with the whale’s remains, as it is not yet certain as to whether it died of some kind of contractible illness or disease.

Members of the IWDG are on site to protect the scene from vandals.

This follows the carving of names and initials into the body of a sperm whale which washed up in nearby Dungarvan two years ago.