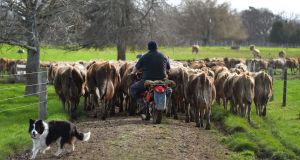 Calls by former president Mary Robinson for people to give up meat in the interests of climate justice have been criticised by farmers. File photograph: William West/AFP/Getty Images

Calls by former president Mary Robinson for people to give up meat in the interests of climate justice have been greeted with anger, even derision.

Speaking to 1,300 young leaders from 190 countries at the One Young World Summit in Ottawa, Canada, she said: “We need each of us to think about our carbon footprint. Eat less meat, or no meat at all. Become vegetarian or vegan.”

Ms Robinson is not herself vegetarian or vegan.

John Comer, president of the Irish Creamery and Milk Suppliers Association, accused her of “facile sensationalism” that “might reinforce underlying dietary problems amongst specific groups like, for instance, teenage girls”.

Roscommon-Galway Independent TD Michael Fitzmaurice wondered what plans Ms Robinson had “for the tens of thousands of people who would become unemployed as a result”. He too queried her carbon footprint.

A spokesman for the Mary Robinson Foundation – Climate Justice said her air miles were monitored and a sum paid over for green investment to make up for her footprint.