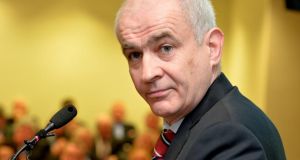 Farm groups have expressed concerns about a climate change report which offers scenarios that would result in major reductions in the size of Ireland’s livestock herds. The assessment of greenhouse gas-mitigation policy options for the EU suggests scenarios which would see the size of Ireland’s beef herd down by 35.1 per cent, to 59 per cent, while the dairy herd would fall by 5.5 per cent, to 14.4 per cent.

The report, by the European Commission’s inhouse science service known as the Joint Research Centre, says these scenarios would see Ireland’s agriculture emissions reduce from between 22.7 per cent and 42 per cent by 2030.

John Comer, the Irish Creamery Milk Suppliers Association president, said the kind of cuts in national herd sizes envisaged in the report were environmentally illiterate. “Quite apart from the fact that they would have ruinous economic consequences for Ireland, they just don’t make any scientific sense and defy the central principle of sustainability which is that you direct production to those locations where it is most environmentally sustainable,” he said.

“Ireland’s grass-based dairy and beef production is, by far, the most environmentally sustainable model where the global population is growing and they have to be fed.”

Conor Mulvihill, European affairs director of Icos, the umbrella body for co-operatives, said the projections were “ immensely concerning” and showed how some aspects of European policy were in conflict. On the one hand, the commission was planning how the EU agri-economy would help meet the global food security challenge of feeding nine billion people by 2050 but on the other hand, its research centre was producing scenarios which envisioned wholesale reductions of EU livestock herds, he said.

“All we will see is production moving outside Ireland and the EU to areas of the world whose GHG [greenhouse gas emissions] output per kilogram of product produced are vastly inferior to what we are doing in Ireland, totally negating the policy, while decimating our agricultural economy.”

Irish Farmers Association president Eddie Downey said the policy scenarios were “hypothetical and illustrative”. He added that the report highlighted the need for the Government to deliver on the outcome agreed at the heads of states meeting in Brussels last year, which stated that agriculture must be treated differently when addressing the climate challenge.

A spokeswoman for the Department of Agriculture said it should be noted that this was a research report by the Joint Research Centre “and not in any sense a commission proposal”. She said officials in the department were continuing to work with colleagues in other departments to ensure a government approach to climate change and agriculture.