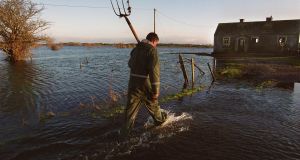 Measures to deal with flooding, coastal erosion and damage to road and rail infrastructure caused by extreme weather events are included in a new Department of Transport plan for climate change.

Minister for Transport Shane Ross today published the Developing Resilience to Climate Change in the Irish Transport Sector, a draft consultation document dealing with possible responses to difficulties posed by climate change across the sector.

It proposes a mix of policy initiatives and physical interventions to mitigate potential damage and disruption to road, rail, air and sea infrastructure due to more unstable global climate projections for the coming century.

In particular, the department is seeking to increase coastal flood defences at Shannon Airport, which is located on the Shannon Estuary and suffered severe flooding when defensive embankments were damaged during storms in early 2014.

The increased requirement for de-icing facilities is cited as a “high-risk priority” for the airport over the coming years.

High-risk priorities for rail transport include the possible failure of overhead wires during freezing events, scour damage to bridges caused by flood debris and storm damage to stations.

The dangers of coastal erosion are also mentioned, and specific reference is made to the need for remedial works or a potential line diversion which may be needed for a section of track near Rosslare Harbour which now lies less than 100m from the cliff edge.

Coastal flooding and erosion are also identified as high priorities for the protection of vital road infrastructure, as is ice damage relating to extreme temperature fluctuations.

The various sectoral adaptation plans, including for transport, follow on from the National Climate Change Adaptation Framework, which anticipates that temperatures will increase by up to three degrees by 2100, sea levels will rise by half a metre and rainfall will be heavier.

The transport adaptation plan predicts that road and railway flooding episodes will become more frequent and will last longer due to the heavier rainfall over future decades.

This will also lead to an increased risk of landslides where steep cuts were made into hillsides to lay railway tracks dating back over a century which would not “be permitted with modern design standards”, it says.

Among the more general recommendations within the plan are for enhanced co-operation between departments, State bodies and other stakeholders in relation to risks posed by climate change, and the implementation of “early warning systems” for transport users.

Consideration should also be given to the development of a modelling tool “which would help to project the likely impacts of climate change on the transport system in Ireland”, it says.

“Recent experiences of extreme weather events have demonstrated some of the vulnerabilities of our transport infrastructure and services,” said Minister for Transport Shane Ross.

“It is vital that we seek to future-proof the efficient functioning of our transport system so that we can continue to accrue the many benefits of transport to the Irish economy,” he added.

Transport sector stakeholders and members of the general public have been invited to make submissions on the document which is available to view on the department’s website, and it will also be on public display at its offices in Dublin, Kerry, Clare and Limerick until February 9th.