Barrage would cost up to €400 million and could not be justified, say experts 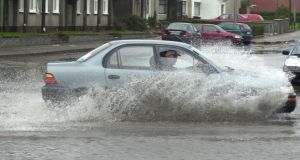 plan to prevent a repeat of last week’s flooding in Cork city centre.

According to Ken Leahy of engineering consultants, Arup, which is finalising details of the Lower Lee Flood Relief Scheme for the OPW and Cork City Council, the idea of a tidal barrage has been ruled out following a cost-benefit analysis.

Mr Leahy said the optimum location for a tidal barrage in Cork harbour would be across the River Lee from Monkstown to Great Island and then from Marlogue Point on Great Island across the Ballinacurra River to East Ferry.

Such a tidal barrage would have the advantage of using Great Island as a natural barrier to incoming tides but even allowing for that, it would still cost €300-€400 million and could not be justified in terms of the benefits, he said.

Mr Leahy was speaking after addressing a conference on flood risk management at which a detailed analysis of last week’s floods was provided by Cork City Council senior drainage engineer Eamonn Walsh.

Mr Walsh said the floods were

due to a high astronomical tide of 1.8m combined with a storm surge of 1.1m due to low pressure and strong south-easterly winds.

“Effectively the high winds probably pushed it close to three metres and then held it up – that’s why even though the high tides on Monday morning and Tuesday night were comparable in terms of height, there was much more flooding on Tuesday night.”

Mr Walsh explained that the island upon which Cork city centre is built is effectively a saucer and once tide waters spill over the rim of the saucer on the South Mall on the southern side and into Emmet Place on the northern side, they take much longer to clear.
Mr Walsh said that with tides of 2.4m, the Lee exceeds its banks on the south channel and floods Morrison’s Island and at 2.5m, it starts to cross the road and flow up side streets towards the South Mall and water starts to enter the South Mall at 2.6m.

Anything over 2.8m can result in water flowing into Patrick’s Street as happened on both Monday and Tuesday.

“It’s clear from these figures that with relatively small rises in tide levels, the effect can be huge in terms of the extent of the flooding in the city centre.”