European tree of the year contender blows over in storms

Giant grey poplar had stood in gardens of Birr Castle, Offaly, for 200 years 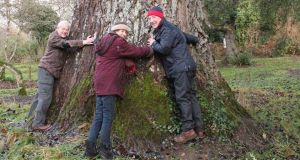 Lord and Lady Rosse of Birr Castle and Tom Roche of Just Forests with the poplar after hearing it had been accepted as Ireland’s nominee in the European Tree of the Year 2014 competition. Photograph: Just Forests

A giant grey poplar, it had stood for 200 years in the gardens of Birr Castle, by the side of the river Camcor. Then, in the early hours of Thursday, it came crashing down, a victim of the storms.

What made its demise even more poignant is that, as described in this newspaper’s Irishman’s Diary of the same day, the poplar was midway through a month-long election campaign, as Ireland’s representative in the 2014 European Tree of the Year competition. It was vying with candidates from as far away as Bulgaria.

Nearer to home, rivals included the remains of an ancient, half-dead oak in Wales, thought to be 1,200 years old. Now, even that has survived it.

The grey poplar was the star attraction in one of this country’s greatest gardens. It featured in a recent book, Heritage Trees of Ireland by Aubrey Fennell, who wrote that, at 42 metres, it was the tallest of its kind in these islands.

“A triumph of hybrid vigour”, he called it, noting that while the variety is produced by a union of white poplar and aspen trees, it far exceeds either of those in size.

Birr Castle was closed yesterday for safety reasons, with more than 30 trees down amid the general carnage caused by high winds. Estate owner Brendan Parsons, Lord Rosse, was said to be particularly upset by the loss of a magnolia imported from China by his great-, great-, great-grandfather, a noted botanist.

As for the grey poplar, there is some consolation. It died like a soldier, falling in perfect parallel with the river. So, with the help of its nominator for the European contest, Tom Roche, a forestry campaigner and furniture maker, the plan now is to leave it where it is, but to carve a long river-facing bench into the trunk, for visitors. In the meantime, it is still standing, in the electoral sense. The European competition is for a tree with a “story”, and although the poplar’s story has become a memoir, this does not disqualify it. Voting is open until February 28th at treeoftheyear.org.