Union is not confident of its intellectual tradition 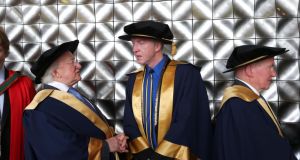 President Michael D Higgins chatting with Milliner/designer Philip Treacy who were conferred with Honorary Fellowships from GMIT at a ceremony in Galway yesterday. Photograph: Joe O’Shaughnessy

THE European Union is not “significantly reflecting the best interests of its citizens”, President Michael D Higgins said at an international conference of European universities at NUI Galway yesterday.

Mr Higgins also criticised the union for its lack of confidence in its intellectual tradition.

The current crisis was “administrative and intellectual”, he said, and there was a “widening of space between democratic control” and the hoped-for level of accountability within the EU. He appealed for a new ethical framework that would be its “defining contribution”.

This framework would prioritise the global challenges of poverty, inequality and food security, and would reflect responsibility for the environment, for labour and for the involvement of citizens.

Mr Higgins appealed for replacement of “hubris with humility”, and a focus on the value of discoveries rather than on “celebrity” during his speech to the assembled 160 delegates representing 40 universities in Europe, who are part of the Coimbra Group.

He paid tribute to EU commissioner for research, innovation and science Máire Geoghegan-Quinn, who was one of several keynote speakers at the conference, and who had earlier told delegates that creativity, research and innovation were “exactly what we need for our universities and indeed for society”.

Mr Higgins said: “The European Commission and indeed all of us are fortunate in having a commissioner who is striving to place such issues at the centre of the European Union policy and budgetary negotiations.”

Not all innovations were a good thing, Mr Higgins continued, citing the 1990s repeal of the Glass-Steagall Act in the US as an innovation that would facilitate modern banking and investment. Repeal of this legislation, which had been enacted after the 1929 great crash, undermined “traditional prudential banking in favour of the more speculative and less risk-averse model”, he said.

Mr Higgins said Europe’s principal crisis was one of “acknowledging that the union itself is not reflecting significantly the best interests of the people of Europe”.

He referred to the creative industries as a rich source of wealth and employment, and said that a combination of “intuitive wisdom” and wonderful scientific discovery was essential and the EU should not be one of “seeking advantage at the cost of others”.

The Coimbra Group of universities was founded in 1985, and includes NUI Galway and Trinity College Dublin among its members.

Mr Higgins also received an honorary fellowship from Galway-Mayo Institute of Technology (GMIT) yesterday in recognition of his service to public life.