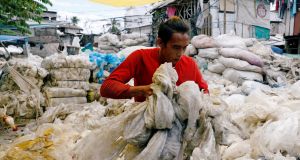 Delivering urgent change in curbing use of plastics “will require real political leadership at national and EU level”, according to Minister for Communications, Climate Action and Environment Denis Naughten.

“This may be challenging, but it is vital,” Mr Naughten told a meeting of EU environment ministers in Brussels on Monday, when a Europe-wide move to reduce generation of plastic and to improve recycling options for such material was endorsed.

The move is a central part of the EU’s new plastics strategy and its commitments to a “circular economy”, but urgency has been added following the effective closing of the Chinese recycling materials market since earlier this year – China was the biggest global importer of used plastic, much of which came from Europe.

It is also a response to growing evidence of marine pollution caused by plastics and the scale of plastic microbeads contamination of the environment.

In addressing what he described as the “plastics crisis” now affecting Europe, Mr Naughten said: “We must act, with urgency, in order to protect our environment, to benefit European consumers and to provide new opportunities for the European economy.”

He believed the best approach to increasing use of recycled plastics and the capacity of the plastic industry in the EU was to “generate a market for plastic recyclate. It stands to reason that once feedstock is available at a competitive price, industry will respond by increasing recycling capacity”.

Improving the quality of collected materials was also critical to increased recycling and implementation of proposed guidelines on separate collection and sorting of waste would address this issue, he said.

“Consumers need to be supported in efforts to do the right thing. Education is key. We must bring our people with us. With this in mind, I launched a single national recycling list last year to standardise what is placed in recycling bins. This was a first list of its kind and it was urgently required.”

Ministers at the meeting backed moves to increase the quality of recycled products through setting new standards; and committed to considering the use of an extended producer responsibility (EPR) scheme similar to one agreed on waste packaging recently together with financial incentives and adoption of voluntary commitments by industry. They also endorsed the “safe recovery of waste containing substances of concern”derived from plastic.

The European Commission’s legislative proposals to curb single use plastics, such as coffee cups and plastic cutlery, are due to be published shortly, ministers were told.

In a letter to European environment commissioner Karmenu Vella on February 28th, Mr Naughten strongly suggested the EU’s focus should be on the more difficult non-recyclable plastics – soft wrapping, film etc, and single use items such as coffee cups, cutlery”.

He added: “If markets cannot easily be established for such products, the EU should collectively consider banning such items coming onto the market and force industry to produce and use recyclable alternatives.”

The European Strategy for Plastics announced in January commits to ending the use of non-recyclable plastic by the end of the next decade.

In the letter, Mr Naughten acknowledged Eurostat’s recent revelation that Ireland is one of the largest per capita generators of plastics in the EU but stressed “we fully embrace the ambition of the new strategy and will strive to go beyond the recommendations contained therein”.

The strategy suggests member states should consider a “deposit and refund” scheme to ensure better recycling of plastic containers, most notably bottles – but has met with resistance among Irish retailers and the recycling industry including Repak.

While an Oireachtas committee is currently reviewing the merits of such a scheme, Mr Naughten told the commissioner he was not convinced this was a model which would be cost effective in Ireland.

The Minister pointed out that while he would be looking at the option of a deposit and refund scheme and would await the committee’s verdict, materials for such schemes – such as PET bottles – were of high quality and value in their own right, and had a ready market.

Mr Naughten said a “green public procurement” policy could deliver immediate results if it was made mandatory, rather than being voluntary as at present. He also confirmed he had commissioned a study to look at the impact of applying levies to single use plastics.