Dublin's top 10 streets for clamping have been revealed 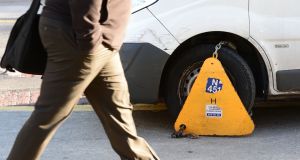 While three quarters of the 54,069 motorists clamped in the Dublin area in 2015 had not been clamped in the previous four years, 2,010 had been clamped between five and 50 times and two were clamped 54 times - an average of once every three or four weeks. File photograph: Alan Betson/The Irish Times

Two Dublin motorists have incurred costs totalling almost €9,000 after being clamped 54 times each in the last four years.

The two drivers, the city’s most persistent parking offenders, have been identified after a four-year analysis of registration numbers by William Keilthy, the parking appeals officer for Dublin City Council.

Mr Keilthy, who deals with appeals against the city clampers, Dublin Street Parking Services (DSPS), has long argued for an increase to €130 in the clamp release fee, which has stood at €80 since its introduction in 1998.

However, in his 2015 annual report, to be presented to the city council on Wednesday, Mr Keilthy is calling for a special “double” fee of €160 to deal with what he describes as “persistent offenders”.

While three quarters of the 54,069 motorists clamped in 2015 had not been clamped in the previous four years, 2,010 had been clamped between five and 50 times and two were clamped 54 times - an average of once every three or four weeks.

“For the 2000+ persistent offending motorists, it is clear that the current declamp fees are not an effective deterrent,” he said.

There was a strong case for updating the regulations to allow for “tiered clamp release fees to target persistent offenders”.

“If that did not work, then the council should have the right to increase this fee further for these types of offenders.”

Just over 5 per cent of motorists appealed the clamp fee to DSPS last year, and three quarters (2,273) were refused a refund.

Of those refused, 527 went on to appeal to Mr Keilthy, who refused just 35 per cent of appeals and granted full or partial refund to 340 motorists.