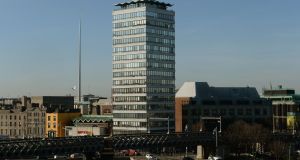 At 28m the maximum height for most of the city would be half the height of Liberty Hall (59m). File photograph: David Sleator/The Irish Times

Dublin City councillors have approved plans to allow apartment blocks to up 24m, the equivalent of eight storeys tall in “low-rise” areas of Dublin city.

The decision means apartment blocks 5m taller than currently allowed in most of Dublin, would be permitted in the new Dublin City Development plan.

City council chief executive Owen Keegan had wanted to allow apartment blocks up to 28m tall – the same height that is currently permitted for office blocks, in “low-rise” areas of the city. Apartment blocks 28m tall would have reached nine storeys. The existing maximum apartment height through most of the city is 19m or six stories.

Mr Keegan urged councillors not to go ahead with these restrictions. “Reducing the definition of ‘low-rise’ to the height of typical Georgian buildings . . . would have severe repercussions across the city in terms of employment, international competitiveness, housing provision, together with critical infrastructure such as transport and hospitals.”

People before Profit councillor John Lyons said anyone who believes 28m was low rise had been “spending too much time out in the sun”.

“I agreed 28m and I haven’t seen anything to change my mind. My clinic is full of people who need housing.”

Dermot Lacey (Lab) said the city planners had always wanted high rise. “They are using the housing crisis as an excuse.”

In the previous development plan heights in the “low-rise” categories were expressed in storeys as well as metres.

However, because of the lower ceiling heights of homes as opposed to offices, the use of storeys meant the inner city low-rise apartments could be 19m and offices 28m. At 28m the maximum height for most of the city would be half the height of Liberty Hall (59m).

Councillors have not sought reductions of mid- and high-rise areas. Nine areas have been designated as suitable for mid-rise buildings (up to 50m), and four, the Docklands, and George’s Quay, Connolly and Heuston can have high rise buildings in excess of 50m.