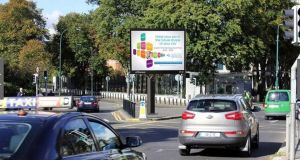 Users of the Dublin Bikes rental scheme are facing increased costs or reduced services following a decision of city councillors to oppose advertising screens in Dublin 4.

Councillors in the southeast area of the city voted against plans to allow the installation of four screens, more than 3m wide and almost 6m tall, to fulfil the council’s side of the Dublin Bikes deal with advertiser JC Decaux.

Three of the double-sided advertising panels known as Metropoles were to be located in Dublin 4 at Donnybrook Road, Shelbourne Road, and Pembroke Road in front of the US Embassy, while a fourth was proposed for Dublin 2 at Charlemont Street.

The plans for the four screens had been described as “nasty”, “contemptible”, “tacky” and “grossly offensive” by An Taisce’s heritage officer Ian Lumley.

The councillors said the location was unsuitable and the screens should be refused. Their recommendation will be put to the full city council next month.

In 2006, the council signed a contract with JC Decaux, one of the world’s largest outdoor advertising companies, for the bike rental scheme. The bike service began operating in 2009 and was extended in 2010 by 100 bikes. To fund the extension the council agreed to 10 additional advertising screens, six of which have been installed but four of which remain outstanding.

The council said it had assessed 50 sites in order to find locations for the panels. The southeast of Dublin has the highest concentration of bike stations at 47 per cent, but has just 25 per cent of the advertising screens, it said.

The council management warned the number of bike spaces would have to be cut or annual subscription costs further increased if the screens were not installed.

The council has already proposed increasing annual subscriptions by 50 per cent to €30 because the scheme, throughout the city, runs at an annual €376,000 loss to the council.

However it said they would have to be increased further to €35 if the four screens were refused. Alternatively, eight bike stations with more than 100 bike spaces, would have to be removed from the city streets.

Assistant council chief executive Jim Keogan said the council had contractual obligations it had to fulfil.

“This is not a threat. This is us, as a city council, having to fulfil our obligations. We went and looked for the last three years throughout the city at in excess of 50 sites . . . There’s no easy way out of this. Sites capable of taking Metropoles of this size are few and far between.”

In addition to the reduction in service, he said, the scheme would lose credibility if there was an increase in subscription costs.

The councillors’ decision puts a question mark over the future expansion of the scheme. The council management had proposed funding the expansion of the bike rental scheme into Dublin’s suburbs by the use of more outdoor advertising. In a report to councillors last April it said the most “commercially efficient” sites for advertising would be heavily trafficked routes, or key civic and retail areas such as O’Connell Street, College Green and Grafton Street.