Government had plan to transfer 20,000 civil servants to work under Council of Ireland 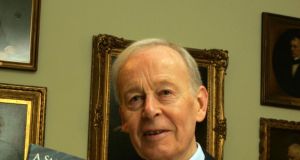 Noel Dorr: he argues that even though it failed to bring peace Sunningdale marked a turning point of great historical importance

One of Ireland’s most eminent diplomats of the past half century has said that part of the reason for the collapse of the Sunningdale Agreement in 1974 was the failure of the Irish government to do enough to bolster the position of then unionist leader Brian Faulkner.

In a major new book on Anglo Irish relations to be published on Wednesday, Noel Dorr, former secretary general of the Department of Foreign Affairs, lays the primary responsibility for the failure of Sunningdale on Northern loyalists and the British government, but he suggests the Irish side played its part in undermining its prospects.

The agreement, signed at Sunningdale Park in Berkshire, England, in December 1973, was a powersharing deal between the Ulster Unionist Party and the Social Democratic and Labour Party (SDLP). It presaged the Belfast Agreement, which was famously termed, by former SDLP deputy leader Seamus Mallon as “Sunningdale for slow learners”.

Dorr’s book, entitled Sunningdale: The Search for Peace in Northern Ireland, is published by the Royal Irish Academy.

Dorr was involved as a junior official in the negotiations that led to the signing of the Sunningdale Agreement which established the first powersharing government in Northern Ireland, along with a Council of Ireland to develop co-operation between the administrations North and South.

The agreement provoked vehement opposition from loyalists, and Unionist Party leader Brian Faulkner, who led the devolved government, was put under severe pressure from the day it was announced.

The powersharing executive lasted only five months, and was scuppered by the Ulster workers’ strike, while the Council of Ireland never met. The agreement also failed in its primary aim of bringing peace to the island.

Dorr reveals that the Department of the Public Service in Dublin devised a plan to transfer up to 20,000 civil servants to work under the Council of Ireland. “If it had become public at the time it might well have sunk the concept of the council on the spot,” writes Dorr.

He also records that while then taoiseach Liam Cosgrave and minister for foreign Affairs Garret FitzGerald had some understanding of unionist fears “they also had more than a gleam in the eye at times about the possibility that the council might set the island on a long-term path to unity”.

Dorr says that a weakness of the agreement, which is now very obvious, was that a declaration by the Irish government on the issue of consent fell far short of what was required to reassure unionists that the Council of Ireland was not designed to push them into a united Ireland against their will.

He says the failure of Sunningdale to bring peace was its biggest shortcoming.

“Unionists still felt under siege and, understandably, many believed that the continuing violence showed they had nothing to gain and much to lose by the agreement.”

Nonetheless, Mr Dorr argues that even though it failed to bring peace Sunningdale marked a turning point of great historical importance. During the two years of negotiations that led to it the British government came to recognised that the “Irish Question” had not been settled by the treaty of 1921.

“If in future, there was to be devolved government then representatives of the minority would share in exercising the devolved powers, and the aspiration of the minority to Irish unity achieved by consent would have to be recognised.”

Dorr quotes the “slow learners” comment by Mallon, who eventually became deputy first minister under the Belfast Agreement, and adds that lessons were learned by all sides from its failure.