Down with diesel: Why the fuel is in environmentalists’ sights

Fuel releases pollutants such as HC, CO, NOx, PMs, while WHO says the fumes cause cancer 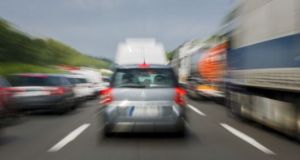 An Taisce wants an increase in tax on diesel in Budget 2017. Why is the conservation body targeting the heavily relied-upon and ubiquitous motor fuel for higher prices in this way?

What’s the story with diesel?

Irish motorists switched to diesel in their tens of thousands when new “cleaner” diesel engines were incentivised by lower road tax about nine years ago. Just over 71 per cent of new cars bought in the Republic by 2015 were diesel cars, way ahead of the average of about 50 per cent in the “EU 15”, the EU’s western states.

Why is this a bad thing?

Minister for the Environment Denis Naughten said air pollution in the Republic was costing the State €3,800 per minute in health costs.

More than 14,000 years of life are lost every year in Ireland due to particulates, and while the precise share is hard to define, diesel vehicles are accepted to be the single largest cause.

What is to be done?

Mr Naughten has announced the Government is to review the use of diesel in transport, energy, home heating and agriculture. Also, diesel tax is about 11c less than petrol tax, so the Government’s interdepartmental Tax Strategy Group has recommended increasing diesel tax by 2.2c cents a year for five years to bring it up to the same level as petrol in 2021.

There have been significant improvements in petrol engines in the last five to seven years, and the Tax Strategy Group noted the health and climate reasons to shift away from diesel were compelling.

So we are to switch back to petrol cars now?

No. The way forward expounded by Mr Naughten is through electric vehicles.

Electric cars - is that a pipe dream?

No. In a significant move away from fossil fuels, Renault is phasing out diesel engines in its smaller models. German lawmakers are also lining up against the use of diesel.

According to weekly news magazine Der Spiegel, a proposal to stop sales of new internal combustion-engine cars by 2030 has gained cross-party support in Germany’s Bundesrat, the country’s upper house of parliament.

“If the Paris agreement to curb climate-warming emissions is to be taken seriously, no new combustion engine cars should be allowed on roads after 2030,” it quoted Greens party lawmaker Oliver Krischer as saying.

A switch to sales of zero-emission cars only would put thousands of German auto industry jobs at risk.

This is because the powertrain of an electric car requires significantly less staff to be assembled when compared with a combustion-engine equivalent, which needs more workers to assemble cylinders, spark plugs, and gearboxes.