Debt collectors to pursue 100,000 for failing to pay bin charges

More than €9m owed to Dublin City Council in debts 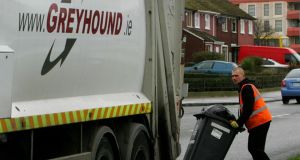 Greyhound Recycling said it has recently outsourced the debts of 104,000 accounts which remain unpaid to a debt collection agency.

More than 100,000 Dubliners can expect to receive letters from debt collectors for failing to pay Dublin City Council bin charges.

In excess of €9 million remains outstanding in arrears since the council sold the service to private waste firm Greyhound Recycling almost two years ago.

Three quarters of households who had their bins collected by the council prior to the sale to Greyhound at the end of 2011 have not paid their council bills.

The council emptied the bins of more than 140,000 Dublin homes before it sold the business. As part of that contract Greyhound agreed to collect the unpaid waste charges, which then stood at €9.2 million, on behalf of the council.

Outstanding
Council figures up to the end of June last show that €9.2 million remains outstanding. Greyhound said it has recently outsourced the debts of 104,000 accounts which remain unpaid to a debt collection agency.

The council said that while the arrears outstanding in January 2012 were €9.2 million, shortly after that bills for the last quarter of 2011 were issued, adding a further €4.6 million to the amount which Greyhound was contracted to collect.

These last bills were standard bills and the recipients were not necessarily people who had not been paying their council waste charges.

Unlike the council Greyhound operates a pre-payment model for its domestic customers, but does use invoicing for commercial clients. Chief executive Michael Buckley said the company had pursued the arrears using its normal collection procedures, but that the money had been “very difficult” to collect.

‘Best endeavours’
“We have made our best endeavours to collect these debts through our normal debt collection process, but it is a very difficult debt to collect. Many of these debtors were households who were continuing to get a waste collection service from the council without paying.”

The council said it was its intention to “vigorously pursue all debts for waste management charges” and it supported Greyhound’s decision to engaged debt collectors.

“We have recently been informed by Greyhound that they are using a debt collection agency to recover the arrears and we are very much intending to encourage this approach to collect the maximum amount of the outstanding debt.”