Annual subscription fee to double from €10 to €20 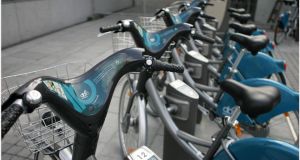 The new contract will not involve any additional advertising and instead Dublin City Council will pay JCDecaux €1.925 million a year for 10 years to run the service and maintain the bikes. Photograph: Bryan O’Brien

A €35 million deal to expand the Dublin bike scheme, with 950 new bicycles and 58 additional hire points, has been agreed between Dublin City Council and advertising company JCDecaux.

Work to extend the stations to Kilmainham in the west of the city and O2 venue at North Wall Quay in the east, will begin next October and is due for completion by July 2014.

Under the original contract, JCDecaux provided 450 bicycles at 40 stations in exchange for the right to erect 72 advertising panels. The bicycles have been available for hire since September 2009 and the scheme has since been extended to 550 bicycles at 44 locations.

However, the new contract will not involve any additional advertising and instead the council will pay the company, JCDecaux, €1.925 million a year for 10 years to run the service and maintain the bikes.

The council has secured €5.2 million from the National Transport Authority to cover most of the €6.1 million cost of installing the new stations.

The council does not propose to increase the hire tariffs, which include 30 free minutes.

Even still, the council estimates it will need to find €500,000 a year to supplement the running costs. It hopes to secure advertising sponsorship to help reduce this cost.