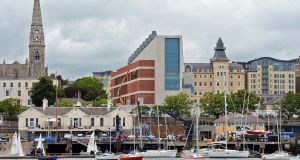 Dún Laoghaire-Rathdown County Council is seeking consultants to advise on new uses for the harbour and ways to revitalise the town. Photograph: Eric Luke / The Irish Times

A major regeneration strategy for Dún Laoghaire is to be devised following the collapse of plans for a cruise ship berth in the south Dublin harbour town.

Dún Laoghaire-Rathdown County Council is seeking consultants to advise on new uses for the harbour, which came into the council’s control last year, and to find solutions to declining commercial space and over-concentration of housing in the town centre.

A €30 million cruise ship berth plan had been proposed in 2015 by Dún Laoghaire Harbour Company, which no longer operates the harbour. It was planned that the berth, which would allow for ships up to 250m in length to dock, would attract about 50 cruise ships during high season.

However, the council three months ago withdrew the application that had been made to An Board Pleanála for the facility. A report to councillors in May advised of the significant commercial, technical and environmental risk associated with the project.

The council is now seeking consultants to provide “expert advice on the development of the harbour for the benefit of its citizens”.

The €100,000 contract will, the council said, involve an assessment of the current marine and tourism uses of the harbour and its economic position, and advise on its future uses and income generating potential.

The consultants should also suggest ways to “deepen the integrations” between the harbour and the town, it said.

In a separate €100,000 contract, the council is seeking consultant to develop a strategy to revitalise the town centre, particularly to grow employment opportunities.

“In recent times, development in the town has been largely focused on increasing residential capacity with a consequential decrease in the amount of small-scale commercial office floorspace available for employment uses locally and a reduction in the overall number of jobs located within the town,” the council said.

Unlike other towns in county Dublin, Dún Laoghaire has seen a substantial number of conversions of commercial buildings to homes, which may be detrimental to the variety and vibrancy of the town, it said.

“Over the past 10 years [the council] has noted an increase in applications to change the use of properties from commercial to residential in the town. Other parts of the county have experienced growth in new office floor space while the town has not.

“The Planning Authority acknowledge constraints regarding available sites and are concerned that without growing the employment base the town may lose the mix of uses that creates economic vibrancy and activity.”

It said the strategy should identify all of Dún Laoghaire’s employment floor space, including vacant and underutilised space and “regeneration opportunities” and make recommendations to “foster the economic growth of the town”.

Tenders for both projects must be submitted by September 17th.