Costs of greenways could rise due to Kerry ‘template’, officials warn 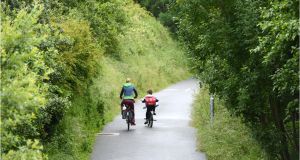 The original application for funding for the South Kerry Greenway “made no provision” for the cost of land acquisition from more than 170 individual landowners, documents released under the Freedom of Information Act reveal.

The estimated bill for the 32km project between Glenbeigh and Renard has ballooned due to both engineering challenges and the rising cost of acquiring the former railway lands for the cycling and walking amenity.

By December 2015, within two years of the application, the estimate for the greenway had reached €16.1 million, the documents show. This was almost four times the original amount approved under the national cycle network funding scheme of the Department of Transport in mid-2014.

Kerry County Council had modelled the project on the Great Western Greenway, where Co Mayo landowners gave “permissive use” for the old railway to be used as a cycleway with no compensation paid out.

In contrast, Kerry County Council found itself having to buy back for public use land that was once in the ownership of CIÉ.

The documents relating to the period 2014-2017 released by the department expressed concern that significant sums were being offered by the council for “poor land ... mostly used for sheep farming”.

Kerry County Council was basing its land offers on the Irish Farmers’ Association/National Roads Authority compensation for road schemes, the department noted. This would set a precedent, and “costs for all greenway projects are going to rise substantially”, according to a December 2015 report.

Fears were expressed in the department that “the genie might be out of the bottle” and prices in Kerry would be a “template” for other greenway projects.

Fees for agents and legal services were also described as “significant”. Often three solicitors and three valuers were employed for each section of land in the greenway, officials noted.

Asked about the cost overruns, a council spokesman on Tuesday said the department had carried out its own review of the plan and in late 2015 expressed “great comfort” at the revised cost estimates.

He added the Kerry greenway “was a forerunner of what is now the accepted standard for greenways in terms of various engineering elements such as surfacing, alignment and gradients. No project of this standard and complexity had been constructed at that time so there were no comparative costs available to the department by which to judge the Kerry County Council estimates submitted”.

The IFA said it had no comment to make on the sums offered to landowners other than to restate its opposition to the compulsory purchase order process in developing greenways.

The estimated cost of the Kerry greenway has now reached more than €20 million, a hearing of An Bord Pleanála was told in November 2019. A decision from the planning board on the project is due shortly.