Corrib gas a ‘template’ for ‘how not to undertake a development’

Peter Murtagh takes a tour of the Corrib gas plant and speaks to people affected by its arrival. The controversial project has started taking gas in from the field, 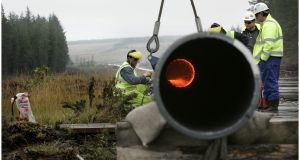 The Corrib gas project is a template for “how not to undertake a development”, according to a new planning approach published by the British Institution of Civil Engineers.

Although the gas project has secured its final Government approval from Minister for Energy Alex White, the prospect of further legal challenges and the large Garda presence at an “invitation-only” opening reflects the fact that it still does not have community consent.

Two of the report’s four authors say that had both Shell and Government agencies adopted a more democratic approach, they could have avoided cost overruns, including “the loss of at least €600 million loss to the tax payer”, and could also have “avoided the serious ensuing conflict with the local community”.

“Space shuttle syndrome” is the term used to describe how a culture of “bureaucratic accountability” at the US National Aeronautics and Space Administration (NASA) resulted in signals being overlooked before the US space shuttle Columbia crash of January 28th, 1986.

The authors devised the methodology after studying research undertaken by the London School of Economics (LSE) for the US Military on burying low level nuclear waste in the late 1980s.

They say it has been applied to a number of sensitive projects in Britain and was also used when University of Ulster was planning a new campus near the Belfast Falls Road peace line in the mid-1990s.

Realising that Corrib project was already proving to be contentious, they tried to approach both Shell, as lead developer with Statoil and Vermilion, and the Government seven years ago.

They say they had no response from Shell E&P Ireland when they contacted its managing director in 2008/9, but did get a more positive response from the office of then government minister Éamon Ó Cuív until it was referred on to the Department of Energy and “silence ensued”.

Mr Ó Cuív and then energy minister Eamon Ryan had attempted to seek a resolution to Corrib by establishing a forum, but by then the refinery construction at Ballinaboy was well under way.

Although several Shell managing directors have acknowledged “mistakes”, the developers are not perceived to have made any safety changes independently and new managing director Ronan Deasy said at yesterday’s opening that “we did not invite the divisions that the project brought”.

Yet the company had chosen to proceed with a location that was described as “wrong” by a Bord Pleanála inspector in 2003, and its pipeline route, initially exempted from planning, was only approved on safety grounds by Bord Pleanála on its third design.

Entitled Global Risk Assessment and Strategic Planning (GRASP), the methodology is “definitely not a manual for steamrolling communities into accepting the unacceptable”, Mr Ocock said.

“Communities can adopt this methodology themselves and it helps to identify key priorities,” he said. It also means developers who think they can buy their way into an area can “spend money in a more constructive fashion”.

Successfully applied to projects in Britain in the past, it can result in relocation of a project, he says.

It is not designed to encourage “selective consultation”, which can prove divisive, or to allow only the loudest protest voices or “rogue stakeholders” to dominate debate, he says.

Instead, it is intended to exploit “the wisdom of crowds” by engaging in “genuine consultation”, rather than “public-relations exercises”.

Ocock and colleagues stress they are” not expensive consultants seeking work” , and have at times engaged on a voluntary basis with sensitive projects.

Projects can only be sustainable if community representatives are “key players” in the “top decision-making team”, they state.

Global Risk Assessment and Strategic Planning: an introduction and facilitator’s guide to the GRASP methodology is published by the Institution of Civil Engineers (ICE).