COP21: View from the streets as summit reaches climax

‘At the 11th hour police decide to tolerate mass protest, bowing to determination of organisers’ 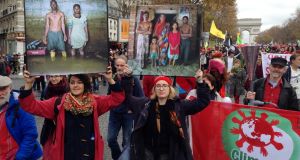 On the stroke of noon on Saturday, in Paris, we emerged from the Metro into a sea of noise, energy and euphoria at the Red Lines protest on Avenue de la Grande Armee.

Instantly, it was clear the people and not the authorities had determined what would happen on the streets, even as the COP21 negotiations in the city neared their conclusion.

The uncertainty that accompanied us on the long bus trip from Dublin to the French capital evaporated in the familiar warmth and fervour of mass mobilisation, replaced by the empowering knowledge that the police could not beat people power.

At the 11th hour they had decided to tolerate the mass protest, bowing to the determination of organisers who insisted they would defy the state-of-emergency ban on public gatherings in the wake of the November 13th jihadist attacks.

About 10km away from the corporate-sponsored COP21 summit of governments at Le Bourget, here were “the real world leaders”, as one of our group put it, “setting the scene for the mass civil disobedience that will take the climate change struggle forward”.

A master class in spin

At COP21, governments gave a master class in spin, agreeing a deal that would see temperatures rise by a disastrous 3 degrees or more, which fails to deliver the level of climate finance needed to ensure justice for poorer countries.

That’s not just the view on the street: former Nasa scientist James Hansen on Saturday called the agreement “a fraud”.

“I was never optimistic about COP21,” said Molly Walsh from Donegal, who works with Friends of the Earth in Brussels.

“My hope and optimism comes from these people here,” referring to the 15,000-strong crowd stretching east and west along the wide avenue in a throng of red clothes, flowers and props.

Like so many at the protest, Molly spends the rest of the year finding solutions to the energy and climate crises, in her case supporting community-owned renewable energy projects around Europe.

It’s the kind of work that answers the call made on a placard close to us: “System change not climate change”.

Wind turbines owned and controlled by the people living near them – that would radically alter attitudes to wind energy in rural Ireland, a system change that would combat climate change.

Climate change activism involves a constant tension between despair and hope. Not long before we left Ireland, an opinion poll suggested only half the populationconsidered climate change a serious issue.

That’s something you never see in a disaster movie about a meteorite heading for Earth – that half the population don’t believe scientists’ warnings.

Add to this the embarrassing refusal of Taoiseach Enda Kenny and Minister for the Environment Alan Kelly to commit Ireland to its fair share of carbon emissions reductions, and it would be easy to abandon hope.

But the inspiration and hope were to be found in the people marching beside us as the 15,000-strong crowd marched and roared towards the Eiffel Tower for another protest at 2pm – including campaigners from the frontlines of fossil fuel extraction who this year defeated Shell’s plans to drill for oil in Arctic Alaska, and others who have forced fracking bans in France and elsewhere.

Within our own group, 20-year-old students who run a fossil fuel-divestment campaign are pressuring companies to move their money away from big oil.

As dusk fell on the French capital, the mood on the streets was bright. The failure of governments to stand up to the corporate lobbyists and deliver a meaningful deal is not a cue for the rest of us to give up.

The global grassroots movement has forced them to come this far – the COP21 deal is far better than the fiasco in Copenhagen six years ago – and that movement can force them to move further, faster.

“There was a feeling here today that the power was with us,” said Martin Hawkes from Dublin, “and we were stating the future we want to create.”