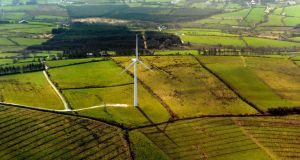 Alun Evans, Professor Emeritus of Epidemiology in Queens University, Belfast said it was “quite possible” if the Dublin array, a proposed €2 billion project which would see 145 wind turbines constructed 10km off the east coast, goes ahead that up to two million people could be exposed to infrasound, a “sizeable minority” of who could potentially experience sleep disturbance. Photo: David Sleator/The Irish Times

Health studies into the effect of wind turbines on those living in their vicinity must be explored to prevent potential health problems, a conference on public health heard yesterday.

Alun Evans, Professor Emeritus of Epidemiology in Queens University, Belfast was speaking at the 2014 Summer Scientific Meeting at the Royal College of Physicians the second day of which was held in Dublin yesterday.

He said it was “quite possible” if the Dublin array, a proposed €2 billion project which would see 145 wind turbines constructed 10km off the east coast, goes ahead that up to two million people could be exposed to infrasound, a “sizeable minority” of who could potentially experience sleep disturbance.

Prof Evans said there was “clear evidence” that, as the size of wind turbines had increased, so has the infrasound and low frequency sounds generated by them and that they were now emitting “serious amounts of noise”.

“When you measure them with the correct filters you find they are producing noise levels which are far above what’s supposed to be permitted,” he said.

He said while many people are not affected, that others could experience sleep disturbance, adding this in turn leads to increased blood pressure which he said is a major risk factor for cardiovascular disease.

Prof Evans said that, while he did not want to sound alarmist, the effects were such that they needed to be taken seriously and investigated further.

Quoting a 2009 WHO report on night noise, Prof Evans said sleep disturbance was emerging as one of the major public health concerns of the 20th century and something which particularly affected children and older people.

He said sleep was “absolutely essential, central to the normal physiological function of the brain and the body” and was necessary for facilitating learning.

However, he said the noise generated by wind turbines were particularly intrusive and incessant, describing it being “like a train that does not pass”.

Citing a 2012 editorial which he co-wrote with Chris Hanning, an honorary consultant in sleep medicine for the British Medical Journal, he said there could be no reasonable doubt that industrial wind turbines, either singly or in groups of wind farms, generated sufficient noise to disturb the sleep of those living nearby.

Prof Evans said wind turbine syndrome - a controversial term coined for the symptoms reportedly experienced by people living in the vicinity of windfarms including sleep disturbances, headaches, dizziness, nausea, tinnitus and inability to concentrate - was real and should be further explored.

He also pointed to other potential health implications including blade flicker and stress caused by impact on house prices, an inability to sell the property and impacts on the community.

Prof Evans said “proper evaluation and proper monitoring” of the potential effects of wind turbines, including cohort studies and smaller intervention studies needed to be carried out, including sleep laboratory studies.

He also called for the Government to carry out a full economic appraisal of wind turbines.